SINGAPORE - The authorities seized $66,000 worth of electronic vaporisers and related accessories in November from a 28-year-old man, who is suspected of ordering the banned devices from overseas to sell here.

On Tuesday (Nov 26), the Health Sciences Authority (HSA) and the Immigration and Checkpoints Authority (ICA) said in a joint statement that the man allegedly ordered the e-vaporisers online, declaring the items as electronic and facial products in an attempt to evade the law.

The man is currently assisting HSA in its investigations.

E-vaporisers, which include e-cigarettes and e-cigars, are battery-powered devices that heat a liquid containing nicotine, producing a vapour that is then inhaled.

Possessing, using, buying and selling these devices are prohibited here.

In the latest incident, ICA's officers first alerted HSA after they found parcels that contained e-vaporisers at Changi Airfreight Centre on Nov 7.

The 24 sets of e-vaporisers and 1,209 accessories ICA found at Changi were all addressed to the same person. This prompted HSA to go to the person's "storage premises", the authorities said.

On the premises, another five sets of e-vaporisers and 3,194 accessories were seized. 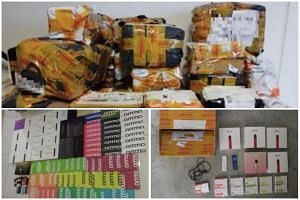 On Nov 13, nearly a week after the man's illegal imports were first discovered, HSA was again alerted to parcels addressed to the suspect, bringing the total number of items seized from him to 189 sets of e-vaporisers and 4,703 related accessories.

The authorities warned that members of the public should not buy any e-vaporisers, including through online channels, that are brought into Singapore.

Members of the public should also "refrain from using e-vaporisers and discard any e-vaporisers they have in their possession", they added.

At least 20 people have been prosecuted for selling e-vaporisers in the past five years, with a 35-year-old man fined $99,000 by the HSA in September, to date the highest amount for the offence.

Members of the public who have information on illegal activities involving e-vaporisers can contact the Tobacco Regulation Branch on 6684-2036 or 6684-2037.