SINGAPORE - Four men have been arrested for selling contraband cigarettes via the WeChat mobile app.

The Singapore Customs said on Thursday morning (Oct 11) that the four Chinese nationals were caught in separate operations on Monday.

A total of 692 cartons, 171 packets and 13 sticks of duty-unpaid cigarettes were seized in the operations.

The total duty and Goods and Services Tax (GST) evaded in the cases amounted to $60,560 and $4,440 respectively, said Singapore Customs.

The mobile phones used by the four men and more than $1,400 suspected to be the sales proceeds of the duty-unpaid cigarettes were also seized.

One man has been jailed, while court proceedings are ongoing against the other three.

In the first case, a man who was carrying a paper bag containing 10 cartons of duty-unpaid cigarettes was arrested in Bedok Reservoir Road. 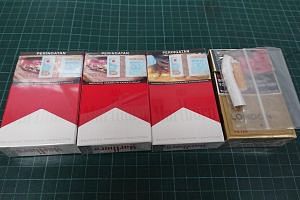 Man fined $1,800 for attempting to smuggle 6 packets of duty-unpaid cigarettes

Investigations revealed that the man was delivering the cigarettes to customers he had solicited via WeChat.

Through leads gathered from this arrest, Singapore Customs officers raided a Housing Board flat in Ubi Avenue 2, where they found more than 206 cartons and 35 packets of duty-unpaid cigarettes.

Two men staying in the unit were arrested and investigations revealed that both men had used the WeChat mobile app to buy and re-sell contraband cigarettes.

Court proceedings are ongoing against this trio, said the Singapore Customs.

Zhu was carrying a plastic bag and a haversack, which contained 12 cartons of contraband cigarettes.

Investigations found that he was delivering the cigarettes to customers he had solicited via WeChat.

Officers then conducted a follow-up raid at an HDB flat in Pasir Ris Street 21, where they uncovered another 294 cartons and 59 packets of contraband cigarettes from Zhu's bedroom.

Zhu was sentenced on Wednesday to 29 weeks' imprisonment for storing and dealing with duty-unpaid cigarettes.

Those convicted of buying, selling, conveying, delivering, storing, keeping, having in possession or dealing with duty-unpaid goods can be jailed up to six years and fined up to 40 times the amount of duty and GST evaded.

Members of the public with information on smuggling activities or evasion of customs duty or GST can call the Singapore Customs hotline on 1800-233-0000, said the authority.

They can also e-mail customs_intelligence@customs.gov.sg, or use the Customs@SG mobile app to report these illegal activities.