Two teenagers were given probation yesterday after they injured pedestrians while riding e-scooters. Student Muhammad Lutfi Dzakir Abdul Rahman, 18, and full-time national serviceman Yap Thanabadee, 19, had pleaded guilty to causing injuries while riding their devices in a rash manner in two incidents.

Their young victims cannot be named due to their age.

In an unrelated case, District Judge Mathew Joseph sentenced a third rider, Toh Zhiwei, 35, to one week's jail for committing a similar offence. He was convicted on July 24 after a trial.

Lutfi, who was sentenced to nine months' probation, was riding his e-scooter near a bus stop in Simei Street 6 when he hit a three-year-old girl in 2017.

Deputy Public Prosecutor Colin Ng told District Judge May Mesenas: "The accused failed to slow down despite noticing that there was a crowd of pedestrians and commuters present waiting for the bus. The accused... proceeded to ride his e-scooter at a speed of about 17kmh (to) 19kmh... which was unsafe in the circumstances."

He tried to stop his e-scooter but it hit the girl, who fell. She was taken to Changi General Hospital with a knee wound and a minor head injury.

Yap was given six months' probation after he knocked into a nine-year-old boy who was getting off a bus. The boy suffered wounds to his ear and knee. 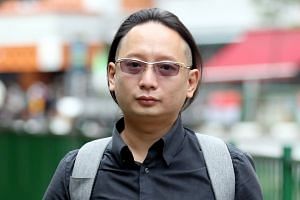 The court heard that Yap had been travelling at about 25kmh when he hit the boy at a bus stop in front of Block 210 Jurong East Street 21 on March 24.

Toh was riding his e-scooter near Chinatown MRT station on Jan 26 last year when he knocked into a Taiwanese tourist's right heel.

Madam Liang Yuan-chia, 45, fell and hit her head. The court heard that he had stopped to help her and also called for an ambulance. She was taken to hospital and found to have suffered a minor head injury, as well as a strained muscle in her buttocks. Toh was arrested later that day.

He intends to appeal against Judge Joseph's decision and his bail was set at $15,000.

For causing hurt by performing a rash act, offenders can be jailed for up to a year and fined up to $5,000.