SINGAPORE – A domestic helper caught on camera in 2017 cleaning a second-storey glass awning by standing on its surface told a district court on Thursday (Oct 24) that her employer had spotted her doing so on two occasions.

Ms Taculad Rose Mae Mata added that her then-boss Belinda Huber alias Belinda Tran did not stop her from cleaning the awning in such a manner and instead told her to hold onto the railing.

The Filipina is now employed as a maid in another household in Singapore after working at Huber’s Goldhill Avenue house near Dunearn Road from April 2017 to March last year.

Ms Mata, however, told District Judge Salina Ishak that Huber did not instruct her to clean the awning by standing on its surface.

She testified that another maid, who was then also working at Huber’s house, was the one who had showed her that method.

This other maid, identified as Ms Carrell Dela Cruz, is now working in Hong Kong, the court heard.

The 37-year-old former employer of the two maids is a director of Huber’s, the parent company of Huber’s Butchery.

She is claiming trial to one count of failing to provide a safe working environment for Ms Mata between early June and July 4, 2017.

The Australian is said to have allowed Ms Mata to clean the glass awning over the porch area of her home. 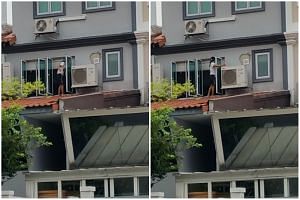 Responding to Ministry of Manpower (MOM) prosecutor Vala Muthupalaniappan, Ms Mata said that Huber was her first employer when she started working in Singapore. She also said that Huber did not show her how to do housecleaning as the Australian “had no time”.

Ms Mata told the court that Ms Dela Cruz said their predecessors had also cleaned the glass awning by standing on it.

Ms Mata agreed that the method was dangerous but did not voice her concerns to Huber.

She also said that Huber’s mother had told her to clean the glass awning when it rained “to save water”.

The court heard that Ms Mata was doing so in 2017 when Ms Villegas Lyn Balbao, a maid who worked next door, spotted her and said she wanted to snap a photo.

Ms Mata told the court: “I said, up to you...whatever you want to do...Lyn (then) went to take her phone...Lyn told me that MOM needed to know as my employer was abusive.”

Ms Mata also said that she did not purposely pose for the picture and has nothing against Huber.

Ms Balbao also took the stand on Thursday. She testified that both Ms Mata and Ms Dela Cruz had earlier told her that they cleaned the awning by standing on it as they were following Huber’s instructions. Ms Balbao, however, admitted that she did not know this for a fact.

Ms Balbao testified that she was ironing clothes at her employer’s house in July 2017 when she spotted Ms Mata on the glass awning.

She told Judge Salina: “I went out to her and said it’s dangerous.”

Ms Balbao testified that it was Ms Mata who wanted  a photo to be taken.

“I asked her ‘Do you want me to pass to MOM?...She said yes,” said Ms Balbao, adding that she did not pass the picture to the ministry. Instead, the image was posted online and it went viral soon after.

Huber is now out on bail of $5,000 and the trial resumes on Friday.

If convicted of failing to provide a safe working environment for Ms Mata, Huber can be jailed for up to a year and fined up to $10,000.