It was Ms Jacqueline Chua's three-week Outward Bound Singapore (OBS) course 40 years ago that led her to pursue a career in teaching.

As a 17-year-old "groping in the dark", she lacked self-confidence and did not think she would qualify for a place in a university, as nobody in her family had done so before.

But the challenging physical activities at her student leaders' course gave the then house captain from Outram Secondary School self-belief. "At the end of each day, we would be asked to reflect on how we would apply what we had learnt to serve others. That's when I realised I should be a teacher. The seeds of service were planted in OBS," said Ms Chua, now 57.

She graduated with top honours from the National Institute of Education. She then taught English and English literature for 22 years, including seven years at Hwa Chong Institution, before retiring in 2008.

One key lesson Ms Chua learnt from her 1977 course was to trust in her own abilities.

"From a teenager lacking in self-esteem to a confident teacher holding a master's degree, I've moved on smoothly in life, thanks to a large extent to OBS," she said.

The lessons Ms Chua learnt from OBS also rubbed off on two of her children, who attended five-day OBS courses and became teachers.

Mr Tommy Kee, 25, is a mathematics teacher, while his sister Carmen teaches at Zhenghua Primary School. Mr Kee said he was pushed out of his comfort zone to try a different leadership style during his Secondary 3 leadership camp 10 years ago.

"I was from Hwa Chong, where most students are quite good individually, but when it comes to the team, sometimes people miss out on the bigger picture when they think about themselves too much."

On his choice of career, Mr Kee said: "I wanted to contribute in a way that marries my passion in mathematics and doing something that gives back to society in a meaningful way." 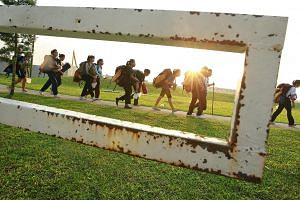 Ms Carmen Kee, 28, a mathematics and science teacher, said that going through OBS as a Sec 3 student in Bukit Panjang Government High School taught her to become a more confident person.

The course gave her a chance to stretch her limits in an unfamiliar environment, she added.

"It inspired me to help others realise their potential, and teaching is a great way to do so."