The number of people marrying in their early 20s or younger has plunged in the past decade.

More Singaporeans are better educated and study for longer periods before they start work. Many also want to establish their careers before they settle down.

Dr Mathew Mathews, senior research fellow at the Institute of Policy Studies, said: "People want to make sure they are sufficiently prepared, in terms of finances, before they tie the knot. More also want a longer courtship to be sure they are compatible."

Younger grooms made up 5.7 per cent of all grooms in 2015, according to the latest Statistics On Marriages And Divorces report. 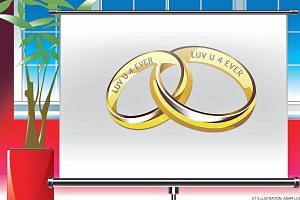 "Many parents urge their children not to wait too long to marry if they have started work and are dating," he said.

"They are afraid their children would have premarital sex, which is seen as bringing shame to the family. So they would urge their children to wed if they have been dating for one to two years."