SINGAPORE - The couple who returned 65,700 yuan (S$13,400) to a money changer at People's Park Complex were in Singapore to visit their daughter during the school holidays.

They were exchanging such a large amount of money for her school fees, psychology lecturer Zhang Yitian told The Straits Times over the phone from China on Saturday (June 10).

His only child, 18-year-old Zhang Jiasi, who currently studies at Hua Yi Secondary School, recently got accepted into the Cambridge School of Visual & Performing Arts.

Ms Zhang got accepted into the school under a conditional offer and needed to have S$60,000 in a local bank account as part of the terms and conditions.

Mr Zhang and his wife, both 46, had returned an extra S$13,400 to Crante Money Changer after a money changer mistakenly keyed in the wrong figure last Saturday (June 3). 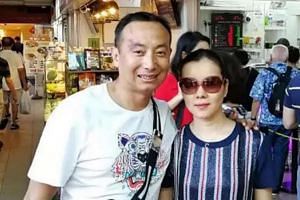 After news broke of their good deed, netizens praised the couple for their honesty. Mr Zhang and his wife, who are from China's northern Hebei province, returned home on Wednesday (June 7).

Said Mr Zhang in Mandarin: "I didn't expect it would blow up so big, last night my daughter told us many people talked about it, but my wife and I don't understand English."

"I know many countries don't have a good image of mainland Chinese," he added. "It's my own country, I understand. There are many of my countrymen who can lack civility, but I still believe there are many more people - not just Chinese - who are kind."

He said most Singaporeans are friendly to them, and his family likes the country very much.

His daughter Ms Zhang, who lives with her aunt here, has been in Singapore for five years.

She told The Straits Times that she was very proud of her parents.

"They have always been my role model," she said.