Construction workers will be trained to use technology such as augmented reality and virtual reality when Singapore Contractors Association Limited (SCAL) opens its new Construction Hub in 2021.

SCAL yesterday revealed the location of the hub - a seven-storey commercial building at 10 Tannery Lane in MacPherson that is due to be refurbished from the fourth quarter of this year.

The association plans to offer experiential learning there, to teach the latest techniques in manufacturing, assembly, virtual design and construction.

SCAL president Kenneth Loo said the hub will act as a centralised base of operations, while there are plans for it to house offices and facilities to provide new and expanded services to the association's roughly 3,000 members and to the industry.

The hub was first announced during SCAL'S 80th anniversary gala dinner in 2017.

The association's current head office is at 1 Bukit Merah Lane 2.

With an estimated gross floor area of about 4,550 sq m, the refurbished freehold property in MacPherson - which is worth $35 million - will also house the offices of SCAL'S five subsidiaries, including SCAL Academy and the Singapore Construction Mediation Centre.

SCAL said the refurbishment costs are still being worked out.

Mr Loo added that other trade associations and chambers in the built-environment sector will be invited to share the space. 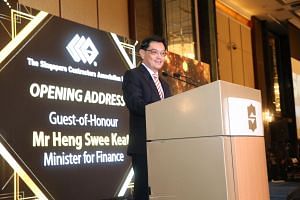 "This serves to facilitate greater synergy and mutual benefits across the construction value chain," he said.

Other plans for the hub include a business helpdesk that aims to help small and medium-sized enterprises in the construction sector navigate the various programmes and incentive schemes that form the Industry Transformation Map.

New construction technologies and innovations will also be showcased at the hub, which Mr Loo said would help to level up the industry.

"There's a disparity between the larger industry players and the smaller ones, whether it be in terms of resources or knowledge," he said. "By showcasing advancements in the industry, we can ensure that there is greater awareness of industrial changes, so the disparity level can shrink."

A version of this article appeared in the print edition of The Straits Times on June 07, 2019, with the headline 'Construction Hub to train workers for the future'. Subscribe
Topics:
More
Whatsapp Linkedin FB Messenger Telegram Reddit WeChat Pinterest Print Purchase Article Copy permalink