"There is rule of law, and rule of law is that if the facts show that an offence has been made, regardless of who you are, action will be taken," he said during a dialogue on racial and religious harmony.

Mr Shanmugam was asked what lessons could be drawn from the case of the Islamic religious teacher who was fined $4,000 last week for making offensive remarks about Christians and Jews.

He was also asked about the City Harvest Church case, in which six church leaders were found guilty of misusing $24 million and using a further $26 million of church funds to cover their tracks.

Speaking to 180 young people from community and religious groups, and institutes of higher learning, Mr Shanmugam said that these cases show the rule of law is strong in Singapore.

People must believe and understand that there is a law and it will apply to everyone, whether you're a minister... or ordinary citizen or pastor or imam.

"People must believe and understand that there is a law and it will apply to everyone, whether you're a minister... or ordinary citizen or pastor or imam," he said.

During the two-hour dialogue at the OnePeople.sg headquarters in Toa Payoh, the young people grilled the minister on hot-button issues on religious harmony and racial identity. Some asked if Singaporeans could move beyond mere tolerance of differences to appreciating diversity. 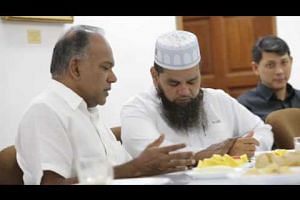 Others asked whether contentious issues like allowing uniformed officers to wear the tudung at work should be discussed openly or behind closed doors.

On the case of the imam, who has apologised for his actions and returned home to India, Mr Shanmugam said that people in Singapore are free to practise and profess their faiths but may not run down any other religion.

Doing anything that will lead to violence against another faith is "an absolute no-no", he stressed.

As for the City Harvest case, Mr Shanmugam said it showed that "whether you are a man of religion or man of commerce, if you've done anything wrong vis-a-vis finances, action will be taken".

He made the point again later, when an undergraduate said that in recent months, "Singapore had a lot of religious trials like the City Harvest saga".

Mr Shanmugam corrected him, saying: "That wasn't a religious trial. That was a trial of religious leaders for financial misdeeds."

The dialogue was organised by the Roses of Peace youth group, whose volunteers regularly give out roses to the public to promote peace and interfaith harmony.

A version of this article appeared in the print edition of The Sunday Times on April 09, 2017, with the headline 'Cleric or not, the law treats all equally: Shanmugam'. Subscribe
Topics:
More
Whatsapp Linkedin FB Messenger Telegram Reddit WeChat Pinterest Print Purchase Article Copy permalink