SINGAPORE - The prosecution has filed notices of appeal against the sentences given to the six City Harvest Church (CHC) leaders on Friday (Nov 27), noting that they were "manifestly inadequate".

"Having carefully considered the written grounds, the Prosecution is of the view that the sentences imposed are manifestly inadequate, in all the circumstances of the case," the Attorney General's Chambers said in a media statement released on Friday morning (Nov 27).

CHC founder and senior pastor Kong Hee and five other church leaders were found guilty and convicted of criminal breach of trust and falsification of accounts on Oct 21.

Last Friday (Nov 20), the six were given jail sentences ranging from eight years to 21 months. The written grounds for the judgment were released on Nov 23.

The prosecution had earlier asked for much harsher sentences ranging from five to 12 years.

Making it clear that Kong was the mastermind behind the conspiracy to cause wrongful loss to the church and defraud auditors, the judge had sentenced him to eight years in jail.

John Lam, former secretary of the church's management board, was given three years' jail. Sharon Tan, former finance manager, was sentenced to 21 months in jail.

Chew, who said he "didn't agree with the conviction and the sentence", would be appealing as well.

The remaining defendants have adopted a wait-and-see approach.

"We are discussing developments with her and she will decide whether or not to appeal by next week," said Sharon Tan's lawyer Paul Seah. 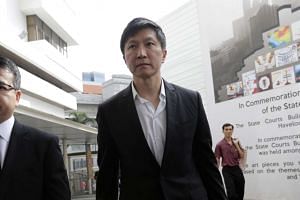 Wee's husband Kenny Low, who appealed for space for his family, said: "I think it's too fast to comment."

On Friday evening, Kong said in a Facebook post that he was going to appeal the conviction and sentence.

The remaining five defendants have seven more days to decide whether to file a notice of appeal.