Some bakeries plan to raise prices; some others absorbing higher costs for now

Baked goods and other buttery treats may be more expensive this Christmas season. A global butter shortage that has pushed prices to record highs this year, and emptied supermarket shelves in France, has made its impact in Singapore.

Bakery chain Swee Heng, which operates 29 neighbourhood bakeries and 12 outlets under the 1989 Classic brand, has had to increase the price of its butter cake by about 8 to 10 per cent.

The bakery, which uses up to 300kg of butter imported from New Zealand a day, now pays nearly double the price for the ingredient compared to a year ago, executive director Eric Ng told The Sunday Times.

While the business has largely been absorbing the increases, new items may be priced 5 to 8 per cent higher to cover costs, he said.

Other bakery and cafe chains have also been feeling the pinch. Ya Kun Kaya Toast said that it has been absorbing the increases, and will not be raising prices or skimping on the slabs of butter used for its toast, though it is closely monitoring the situation.

Bakery chain BreadTalk said that it is seeing "an upward trend in butter prices and will continue monitoring to determine its impact in the long run", but said it has not increased prices of its products for now.

Across Europe and the US, the growing demand for natural ingredients has benefited butter sales, as health authorities have changed their diet recommendations that animal fats are a cause of heart disease, and instead recommended avoiding trans-fats used in margarine, which has contributed to a shift away from margarine towards butter.

The price increases come amid a dip in supply and a global surge in demand for butter, with Asia fuelling much of the growth.

Butter sales in the Asia-Pacific region rose from US$1.87 billion in 2014 to an estimated US$2.04 billion (S$2.8 billion) this year, according to market research firm Euromonitor International.

Singapore imported 18,200 tonnes of butter last year, mainly from New Zealand, the Netherlands, Australia and France, according to the Agri-Food and Veterinary Authority.

Mr Raphael Moreau, a food research analyst at Euromonitor International, said that in Britain, supermarket butter prices are estimated to have increased by up to 10 per cent over the past year.

He added that butter prices have also increased rapidly in Australia and the United States.

"Across Europe and the US, the growing demand for natural ingredients has benefited butter sales, as health authorities have changed their diet recommendations that animal fats are a cause of heart disease, and instead recommended avoiding trans-fats used in margarine, which has contributed to a shift away from margarine towards butter," he said.

New Zealand dairy group Fonterra, which supplies butter to Singapore under the Anchor brand, said that its business here has seen double-digit growth over the past year.

Factors contributing to the current shortage include the decline of global milk production and a slowdown in butter production in traditional dairy-producing regions like the European Union and the US, which are prioritising higher-returning dairy products such as cheese, said Fonterra Singapore's general manager Aaron Schenck.

For SCS Dairy - which produces about 2,000 tonnes of butter a year in Australia, about half of which is exported to Singapore - prices began creeping up in September last year.

The cost of goods for SCS has increased by 40 to 60 per cent due to the shortage, said its marketing manager Dilpreet Kaur. 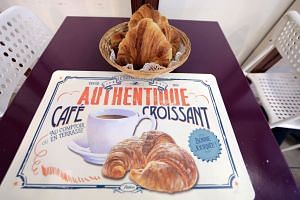 The global average price is expected to stabilise at 20 to 30 per cent higher than a year ago, she added.

"We are trying not to impact customers too much... SCS has not increased its retail price, and has instead reduced its discounts."

Supermarkets here said that they have had to increase butter prices in recent months, given the price increase by some distributors.

Cold Storage carries 19 butter brands, which now range in price from $4.40 to $6.40 for a standard 250g block after a 10 per cent increase since August. Some of its other distributors have also "expressed plans for a price increase in the near future", a spokesman said.

Giant said that prices for its butter brands have similarly increased by up to 10 per cent over the past two months. FairPrice, which carries over 20 brands of butter that now cost $3.95 to $5.95 for a 250g block, said prices increased early this year, and have remained stable since then.

Shoppers that The Sunday Times approached in supermarkets said that they had not noticed the price increase of butter and pointed out that there were usually discounts for such products anyway.

Said events manager Kerry Sim, 26: "I'm more concerned about prices going up at restaurants and cafes - butter is used for everything, not just cakes."

CIMB Private Bank economist Song Seng Wun said that consumers in developing Asian markets are taking to full-fat butter and baked goods, while global supply has fallen due to poor weather and other factors.

"Supply will catch up... but with Christmas around the corner, we are likely to see premium butter prices," he said.