SINGAPORE - The fact that the perpetrator of the Christchurch attacks was influenced by far-right white supremacist beliefs demonstrates how radicalisation could be present in any race or religion, Minister for Culture, Community and Youth Grace Fu said on Saturday (March 30).

The attacks, which coincide with the resurgence of identity politics, underscore the importance of preserving social harmony in Singapore's multi-racial and multi-religious society, she added in a keynote speech at a youth forum.

The event, organised by inter-faith group Roses of Peace, discussed the aftermath of the Christchurch mosque shootings on March 15.

As more people identify themselves along narrow ethnic, cultural and religious lines, there is a risk that groups will try to maximise their space and influence at the expense of others, Ms Fu said.

This has led to conflict and discord in other territories, but this must not be the path for Singapore, she cautioned.

"Every person or group has to be accommodating. It may mean giving up a bit of one's own space and comfort for others, but in return other groups do the same for the practice of our own beliefs."

She added that the findings of a recent Institute of Policy Studies survey which showed that nearly one in two young Singaporeans would allow religious extremists to publish their views online is "worrying". 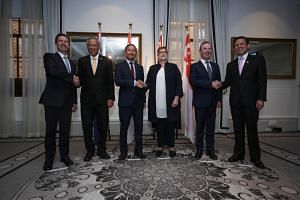 This is because extreme online sentiments can affect real-world relationships and perceptions.

"Frequent posting of extreme views, if left unchecked, will normalise such views and, over time, make them mainstream. Singaporeans must hence be discerning about messages that propagate prejudice relating to race and religion and take a stand against such hatred and prejudices," said Ms Fu at the forum held at the OnePeople.sg office in Toa Payoh.

Citing the example of a video of haka, a ceremonial Maori dance, performed by New Zealand students from several schools in a tribute to the Christchurch victims, Ms Fu said that the Internet and social media can instead be used for the strengthening of relationships and respectful exchange of viewpoints.

In a digital age, the impact of terrorism is also amplified, said Ms Fu, pointing to how the Christchurch attacker had published his views online before the killings and had even live-streamed the attacks.

"Online disinformation and falsehoods are insidious to our multiracial, multi-religious society. When we see or hear news on disputes relating to religious and racial prejudice... We should actively check the accuracy of the sources, and seek clarification from religious or community leaders."