Chinese President Xi Jinping will visit Singapore next month, capping a year-long series of celebrations to mark 25 years of diplomatic ties as well as meetings to deepen bilateral cooperation.

In their separate meetings yesterday with visiting Chinese Vice-Premier Zhang Gaoli, they noted the close bilateral ties and discussed areas of cooperation. 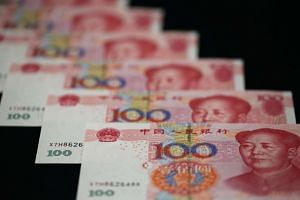 Mr Xi, who last visited Singapore in 2010 as China's vice-president, will be making the trip as part of an exchange of state visits this year, with Dr Tan visiting Beijing and Tianjin from June to early July.

Earlier at the annual meeting of the Joint Council for Bilateral Cooperation (JCBC) yesterday, Singapore Deputy Prime Minister Teo Chee Hean also met Mr Zhang. "We look forward to welcoming President Xi Jinping for his state visit to Singapore in November to commemorate this milestone," said Mr Teo, referring to the 25th anniversary of the establishment of bilateral ties.

The JCBC is the highest-level bilateral mechanism to deepen political and economic ties. High on the agenda yesterday was a proposed third government-to-government project in China's western region and the upgrade of the China-Singapore Free Trade Agreement (CSFTA).

Despite expectations that both sides would announce a city of choice as well as the launch of formal talks of the CSFTA upgrade, no such progress was revealed in a joint statement from Singapore's Ministry of Foreign Affairs, Ministry of Trade and Industry and Ministry of National Development.

The statement said both sides agreed to work towards a CSFTA upgrade that is "substantive, mutually beneficial, and with a level of ambition befitting our special relationship".

The statement added that the third project should focus on one core city in China's western region and on four sectors of collaboration: financial, aviation, logistics, and information and communications technology.

The spotlight yesterday fell more on an agreement to expand international use of the Chinese yuan through Singapore.

The Monetary Authority of Singapore (MAS) said existing cross-border yuan initiatives in two flagship Sino-Singapore projects - Suzhou Industrial Park and Tianjin Eco-city (TEC) - will now be expanded to the cities of Suzhou and Tianjin, allowing banks in Singapore to lend yuan to Suzhou and Tianjin companies, among others.

"The initiatives announced today are a testament to the excellent relations between MAS and its counterpart in China," said MAS managing director Ravi Menon.

Four new agreements were inked yesterday, including the development of a training facility with a "Harvard Business School concept" in the Sino-Singapore Guangzhou Knowledge City.

NTU vice-president (research) Lam Khin Yong said he envisioned Crest as a training facility where students attend classes and stay in on-site accommodation to deepen their interaction, like at Harvard.

Deals on the TEC were also inked, such as a platform for firms to test "green" building technology in temperate climates.