SINGAPORE - The man who was filmed mocking a taxi driver has apologised to the cabby and, as a gesture of goodwill, he has promised to give 200 packets of chicken rice to other cabbies.

Mr Gary Lim, who is the boss of The Yang's Traditional Hainanese Chicken Rice, incurred the wrath of netizens recently when a video went viral of him blocking a taxi driver's way and telling him that he "cannot do big things" as he is a taxi driver.

Mr Lim, 37, has since apologised to the taxi driver, a 33-year-old who is identified only by his surname, Sun. To show his remorse, Mr Lim's outlets at 8 Braddell Road and 562 Serangoon Road will prepare 200 packets of chicken rice - 100 per outlet - for taxi drivers between 3pm and 5pm on Tuesday (May 2), Shin Min Daily News reported on Sunday (April 30).

Due to space constraints, and so as to let more people enjoy the food, each taxi driver will get one packet and only takeaways will be possible.

Mr Lim apologised to Mr Sun on Saturday (April 29) evening during a phone conversation, which ended with Mr Sun wishing Mr Lim well, adding that he hoped they could move on from the incident.

Speaking in Mandarin, Mr Lim said: "I want to apologise. I drank too much and said some senseless things. But I had no intention of harming you. Frankly, I was quite rash, I said things I shouldn't have said, and hope you can accept my apology."

To this, Mr Sun replied: "I feel this apology isn't an issue, in fact I didn't take (the incident) to heart. I'm already at peace. But before I formally accept your apology, I want to let you know that no matter what problem a person faces in life, he should not vent his anger on others."

"You are a grown man, not a child," Mr Sun added. "So I hope you'll treat this as a lesson, keep moving forward, become more amicable, and not look down on other people's jobs. Whether you are a cleaner, or a big boss, I feel this is a question of basic respect towards others."

Mr Lim had approached Shin Min Daily News himself, as he hoped to have the chance to apologise to the Mr Sun in person. However, as the latter was busy with work on Saturday evening, the newspaper helped to facillitate a phone conversation between the two men. 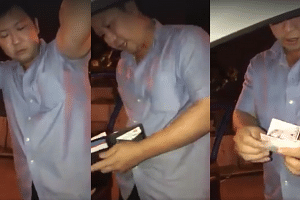 In the 2min 4sec viral video filmed on Thursday (April 27), Mr Lim appears drunk and is shown blocking the taxi driver from closing his door.

"Look I have so much money, I can't control myself," Mr Lim says in Mandarin, and begins counting money - including $1,000 dollar notes - in front of Mr Sun.

He then lunges at Mr Sun, trying to grab his phone, before laughing.

This was not the only video of a man flaunting his wealth to have gone viral online.

At 1am on Thursday (April 27), another man refused to pay his $15 taxi fare when he arrived at his destination in Jalan Chermat, saying that he ran a "million-dollar business", and "had plenty of money", Shin Min Daily News reported on Sunday (April 30).

The man, who looked like he was in his 40s, only agreed to pay his fare after the police were notified.