SINGAPORE - Lovers of the king of fruit can now satisfy their cravings at lower prices.

Durian sellers across the island report that prices have fallen by as much as 40 per cent within a month. Popular varieties of durian, like the Mao Shan Wang, are now going for $12 to $20 a kg, down from $20 to $28 last month and a drastic reduction from the highs of more than $40 last year.

The durian season is typically from June to September, with the various types of durians grown in different parts of Malaysia peaking at different times. However, advantageous hot weather in Malaysia has produced a bumper crop this month, particularly in southern parts of the peninsula such as Johor.

Some sellers predict a peak season in the middle of the year, which could see prices fall even lower.

The lower prices are welcomed by customers as well as vendors, whose businesses were affected by the exorbitant prices last season. Mr Sam Ong, of Delight Fruits, said he has seen more customers recently. His durians now sell out on Saturdays and Sundays, even though weekend prices can be 20 to 30 per cent more expensive than those on weekdays. Two weeks ago, his durians rarely sold out.

However, Mr Goh Kwee Leng, 67, who runs Durian Mpire by 717 Trading in Yio Chu Kang, said the prices are ultimately unpredictable as they depend on external factors like the climate and demand from China, which tends to raise prices.

Demand had also been affected by a post-Chinese New Year slump and people not knowing about the current season. Several customers were at the store when The Straits Times visited Durian Mpire, but nothing compared to the queues of more than 10 people that can form during peak seasons, said Mr Goh's son Ming Hong, 43, who dropped out of school at 12 to join the business.

Still, the younger Mr Goh is encouraged by the month's output. "Sometimes we tell people not to buy if the quality is not good," he said in Mandarin, "but now all of it tastes good, so it's okay."

As this durian season gains momentum, some sellers forecast that prices will continue to fall. Others, however, believe prices could return to normal as soon as next week. 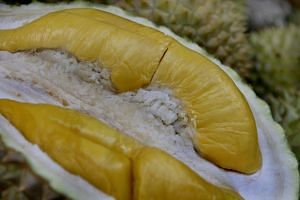 Hail the king of fruit - 10 types of durians from Malaysia

Meanwhile, Singaporeans are enjoying the off-season bargain. "I'll be sure to get some this weekend," said Nabil Danil, 19. "I'm really excited as I can get more durian for less money."

There are others, though, who are not particularly attracted by the price fall. Said manager Gina Seh, 39: "I buy only when I feel like eating. I wouldn't purposely buy just because the price dropped."

Others, like public servant Tan Wei Wei, 33, are deterred by the "heatiness'' of the fruit. "The price drop is great, but I don't think I will be consuming it any time soon as I'm still very heaty now and the weather hasn't been helping."