Charities and other organisations in the social service sector can set up endowment funds for businesses and individuals to channel their donations.

The invested capital would provide regular and longer-term contributions for charities, giving them breathing room to focus on long-term goals instead of worrying about short-term funding needs, said National Council of Social Service president Anita Fam.

She was responding to a question on how the social service sector can encourage businesses to contribute in a more impactful way.

Ms Fam was one of three panellists yesterday at the St Gallen Symposium 2019 Singapore Forum.

The event, which brings together policymakers, business leaders and academia, was held at the National University of Singapore's Shaw Foundation Alumni House.

Besides endowment funds, Ms Fam said businesses can work with the social service sector to share expertise they have in their respective fields.

"It is also important to engage millennials, and fresh ideas that come from them... We must be open to those ideas," she added.

This year's symposium centred on the theme "Capital for purpose".

Singapore Pools chief executive Seah Chin Siong, who was also on the panel, said companies must continually question if they are meeting the needs of those they purport to serve.

He said that while Singapore Pools has been channelling its surpluses to good causes through the Tote Board for the past few decades, the company went through a "soul-searching process" a few years ago - to figure out how it can improve its efforts.

DBS Group chief executive Piyush Gupta, who was also on the panel, said businesses should look for synergies with the communities they serve.

This is to ensure that their own goals align with their social missions.

For instance, DBS provides funding for social enterprises, many of which are small and medium-sized enterprises, he said. This aligns with the company's large SME banking business. 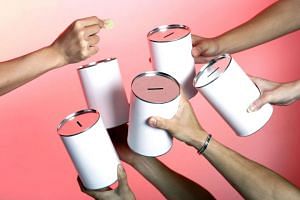 Charities here received $2.9 billion in donations in 2016, the highest in five years 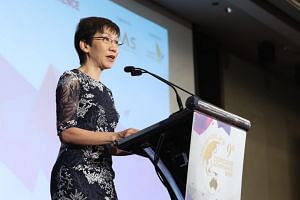 Charity groups can apply for up to $900,000 in grants each to become better at what they do

She said businesses have a stake in meeting society's needs and improving people's lives.

"For businesses, profits are just a shorthand notation for financial strength and viability.

"Businesses can thrive only if they succeed in meeting the needs of their customers as their primary mission, but that alone is not enough for longevity," said Ms Ho.

In a speech that focused on the environment, she urged businesses to take urgent action to combat climate change and its impact.

It is one of the 17 United Nations Sustainable Development Goals (SDG) that Singapore, together with nearly 200 other UN members, signed up to deliver by 2030.

Noting a report by the UN climate panel last year which warned of a 1.5 deg C rise in temperature as early as 2030 that could lead to deadlier weather extremes, Ms Ho said Singapore has to move faster in order to transit into a low carbon and more energy-efficient economy.

Among the changes that can be made, she said energy consumption for air-conditioning can be halved through the use of large-scale infrastructure, such as by employing more district cooling systems that are seen in the Marina Bay area.

"Global warming is one clear and present danger to Earth and mankind. We have only about 10 years to reduce our carbon footprint.

"There is, as you know, no Plan B for us because there is no Planet B," she added.

She also called on businesses and organisations to continue to invest in people.

While governments can help support basic early education, she said industries and organisations "who know where the needs are and where the technology is driving towards" must all play their part in the continuing education of the workforce.

The Switzerland-based symposium was established in 1970 by the International Students' Committee. This is the fourth time Singapore is hosting the symposium.