Last Sunday, I took my toddler out for lunch somewhere I knew would be relatively spared from the usual weekend throngs: Orchard Road.

Sure enough, we enjoyed a leisurely, crowd-free day without having to queue for carpark spaces or restaurants. But what was a pleasant experience for us is an increasingly worrying one for Singapore's main retail belt.

Its need to attract more shoppers has become so pressing that the Government is now considering pedestrianising the whole road, which would allow for larger-scale events and activities to take place in the middle of the thoroughfare.

As might have been expected, the extremity of the plan has drawn mixed reactions. Some have welcomed it, saying a car-free Orchard Road would revitalise street life.

Others warn that it may backfire by deterring consumers who prefer to drive, including affluent shoppers and families with young children. While most of the malls along the road have carparks that can still be accessed from neighbouring streets, traffic snarls are likely to occur as a result of closing such a busy thoroughfare to vehicular traffic.

Having a car-free shopping road to host festivals and fairs is an undoubtedly nice idea, as are all the other suggestions put forth by Trade and Industry (Industry) Minister S. Iswaran two weeks ago to breathe new life into Orchard Road.

These include organising ad hoc street markets and shows in the existing open-air carparks in Grange Road and Angullia Park; creating a Shibuya-like "scramble crossing" at a major junction like the one where Bideford Road intersects with Orchard Road; and showcasing a rotating series of local designers and products at a Design Incubator in Orchard Green, where the Keepers pop-up store was once located.

Whether they will work to draw more crowds to Orchard Road, however, is another question.

Many other attempts have already been made to rejuvenate Orchard Road in a series of initiatives that dates back several years. In 2005, as a rookie property journalist, I reported on the feverish anticipation when plum plots of land were released to create the first new malls along the shopping belt in over a decade: Ion Orchard, Orchard Central and 313@Somerset.

For Orchard Road, what may work better could be to convert some of the shopping spaces to other purposes that will attract a regular pool of returning and spending visitors. This would serve the double purpose of reducing the retail duplication along Orchard Road and increasing the diversity of permanent activities. 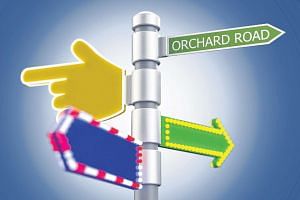 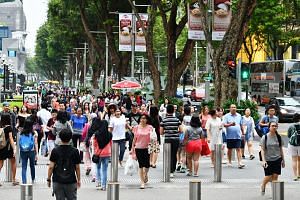 Pedestrianising Orchard Road may kill, not kindle, its appeal

These were part of the much-hyped "Orchard Road makeover", which was supposed to draw shoppers and tourists back to the somewhat tired retail street.

Since then, more new malls have appeared, including Knightsbridge and Orchard Gateway. Robinsons boldly took over The Heeren, while Mandarin Gallery underwent a $200 million facelift. One lane of Orchard Road was permanently closed to widen the pavement outside Ion Orchard, Wisma Atria, Ngee Ann City and Mandarin Hotel.

New plants, flowers and street furniture were added, while outdoor LED screens, late-night shopping, car-free days and grants for underground linkways have also been introduced - though the last has yet to be taken up by any retailer.

And Orchard Road has been the better for these changes. Several popular international brands, including H&M and Victoria's Secret, have debuted flagship stores in the renovated shopping belt. The area around Somerset MRT station, which was pretty much a dead zone 10 years ago, is now a fully fledged retail destination in its own right.

But none of these moves has been - nor, likely, will the new proposed ideas be - a game-changer in making Orchard Road the focal point of shopping in Singapore, for the simple reason that they don't address the area's fundamental problem.

The issue is not the road, but the shops. Orchard Road has too many shopping centres, all selling too-similar things, for a market as small and as digitally savvy as Singapore. As one shopper told The Straits Times recently about the area's malls: "Inside, they're all about the same."

The proliferation of well-stocked suburban malls and the competition posed by glitzy Marina Bay Sands have made the local retail landscape more cut-throat, at a time when the whole industry is itself under threat from the disruptive allure of e-commerce. Half of Singapore's residents made online purchases in 2014, double the proportion from a decade ago, according to the latest public data.

Making Orchard Road car-free and staging festivals there could attract some crowds to the street but may not push them into the bordering malls, especially if the stores themselves make no further effort to cultivate a unique appeal.

Here, retailers must also play their part. There are precious few brands in Orchard Road that don't have a presence elsewhere in Singapore, not to mention online. Brick-and-mortar stores in the area, therefore, need to offer something worth the trip - whether it is a new-format experiential store, exclusive product ranges or better service.

One frequent complaint is that international brands carry fewer products here than in other overseas stores or even on their websites. Shoppers (like myself) often go in looking for something they've seen in another country or online, only to be greeted by blank looks and told that the products are not available here. If the Orchard Road stores can arrange to ship in special orders, that would be a clear and distinguishable premium offering.

Pedestrianising a retail street improves the consumer experience only if the street is too crowded, not the other way around. In New York's famous Times Square, banning cars from the central Broadway artery has worked because the area is jam-packed with car and human traffic alike, which used to result in frequent accidents.

For Orchard Road, what may work better could be to convert some of the shopping spaces to other purposes that will attract a regular pool of returning and spending visitors. This would serve the double purpose of reducing the retail duplication along Orchard Road and increasing the diversity of permanent activities - as opposed to ad hoc events in public spaces - that can be carried out along the street to attract more shoppers.

One option could be for the Government to acquire the ageing strata-titled malls - such as Orchard Plaza, Far East Plaza and Midpoint Orchard - that have long lagged behind the development along the road. It won't be cheap, but neither will pedestrianising Orchard Road.

The buildings could then be turned into attractive civic facilities that can draw crowds, such as arts venues for concerts and performances, multi-purpose sports hubs, or even a children's centre to draw families. In Fukuoka, where I lived for a year, smack in the middle of the downtown area was a popular publicly run children's centre which offered family-friendly events and spaces, children's books and crafts, and - crucially - hourly babysitting and childcare services.

If it proves impossible to acquire entire strata-titled malls, another option could be to buy over a significant chunk of the strata units, then turn them into rent-controlled spaces where smaller local players can afford to set up shop.

This would take the idea of the Design Incubator further, and address the common criticism of Orchard Road that the rents are too high to support an organic flourishing of independent local boutiques and speciality cafes, which have instead popped up in areas such as Tiong Bahru and Haji Lane. It would also make the area more interesting to a younger generation of consumers, which will be crucial to maintaining Orchard Road's buzz in the future.

In Tokyo, for instance, there are still fewer shoppers in tidy, international-branded Ginza - even when it goes car-free on weekends - than in youth-friendly Shibuya, a messy hive of local shops co-existing alongside bumper-to-bumper traffic, on any given weekday.

Attracting more shoppers to Orchard Road by getting rid of the cars there might be a long shot. Making the shops themselves more interesting seems like a better bet.

A version of this article appeared in the print edition of The Straits Times on May 01, 2017, with the headline 'Change the shops, not the street, to save Orchard Road'. Subscribe
Topics:
More
Whatsapp Linkedin FB Messenger Telegram Reddit WeChat Pinterest Print Purchase Article Copy permalink