Risk not in terms of racial profiling, he says in reply to question on use of SGSecure app

With the launch of the SGSecure mobile application, people can alert the authorities to any suspicious activities with photos or videos.

But a university student wanted to know if there was any concern that this could result in racial profiling.

No, said Home Affairs and Law Minister K. Shanmugam, as he tackled this question from the National University of Singapore (NUS) student at a dialogue yesterday.

"That's where I think the underlying education and acceptance of each other's differences and religious beliefs, which are accepted by the majority of our population, come in," said Mr Shanmugam, the keynote speaker and guest of honour at the inaugural PSAA-TwinRock Singapore Security Dialogue.

Singaporeans are moderate in their religious beliefs and the risk is not in terms of racial profiling but citizens seeing no need to be concerned about the terror threat, Mr Shanmugam told a 350-strong audience. "The real challenge for us is how to make our population more sensitised, and not that they will overreact," he said.

The SGSecure mobile app is part of a series of measures introduced in the SGSecure national movement, launched in September by Prime Minister Lee Hsien Loong with the aim of getting people to stay alert, united and strong in the event of a terror attack. 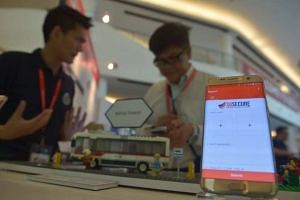 First look at SGSecure app: How to use it?

The app can broadcast important alerts during major emergencies and can also be used to alert the police to incidents or to request help.

At the dialogue, Mr Shanmugam first talked about the threat of the Islamic State in Iraq and Syria (ISIS) militant group and its growing influence on the South-east Asia region.

Rather than launch attacks on "fortified places", ISIS has changed its focus to soft targets such as schools and concert halls and used "everyday tools" such as vehicles in its attacks, he said.

He also showed videos and news reports on how ISIS has gained support among radicalised individuals in Malaysia, Indonesia and the southern Philippines in recent years.

In Singapore, the threat includes those who may smuggle weapons in via the checkpoints and others who may plan attacks against the country from overseas.

Besides beefing up the security forces, there is a need to prepare the population on how to prevent an attack from happening, said Mr Shanmugam. "We will be tested not only by whether an attack takes place, but also by how society responds the day after," he said, citing how people in Paris and London "bounced back with spirit" after attacks in those places.

He added: "If we started pointing fingers at each other, we would have lost. But if we respond strongly, then we would have won."