Parts of a century-old road may have to be sacrificed to make way for the Tengah Air Base expansion.

However, portions of the Lim Chu Kang heritage road could yet survive, with The Straits Times understanding that the authorities are looking at how they can be retained.

On Tuesday, the Ministry of National Development (MND) said that Lim Chu Kang Road will be realigned to make way for a bigger air base.

It told The Straits Times yesterday that construction of the new road is expected to begin by next year. When the 9km road is completed, the existing Lim Chu Kang Road will be closed and traffic will be diverted to the new one.

Lim Chu Kang Road is home to one of Singapore's five heritage roads, stretching 1.8km from the Sungei Gedong Road junction to the junction of Ama Keng Road.

It will be the first heritage road to have trees removed or transplanted as a result of urban developments. These roads were gazetted in 2006 and are characterised by their tall, mature walls of vegetation and overarching tree canopies.

The Lim Chu Kang heritage road, now lined with some 330 trees, was built in the 1800s to serve the gambier, pepper and rubber plantations in the north-western countryside. As the population in the area grew, it served as a link between the villages and the city-bound roads of Choa Chu Kang and Bukit Timah.

TOO CLOSE FOR COMFORT

The planes fly so close to us that I tell my friends I enjoy a free Air Show.

MR DERRICK NG, an insurance sales manager, about the frequent and loud fighter jet roars that can be heard from his Jurong West Street 25 home, 5km from Tengah Air Base 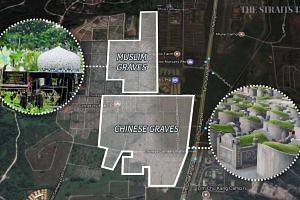 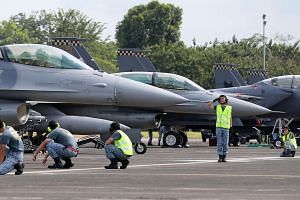 The free Air Show Tengah residents would rather shun

5 things to know about the expansion of Tengah Air Base

Today, the heritage road's green buffer, spanning 10m on both sides, is dominated by Broad-leafed Mahogany (Swietenia macophylla), a common roadside tree, and self-sown exotic tree species such as the Albizia and African Tulip.

A spokesman for MND and National Parks Board (NParks) said mitigation strategies could include transplanting affected trees to the new road where possible.

Dr Shawn Lum, president of the Nature Society (Singapore), said of the realignment: "At face value, we are looking at aesthetic loss, and some limited localised biodiversity impact if we do lose habitat."

But "anywhere where wildlife can make a home has value".

The fast-growing Albizia, for instance, is often a home for woodpeckers, parrots and eagles.

Dr Lum said a survey should be done to assess what sorts of wildlife are in the area - and if these include endangered species such as pangolins and leopard cats, both found in nearby Jalan Bahar.

The imminent realignment of Lim Chu Kang Road is part of an ongoing trade-off between nature and development in Singapore.

In March, The Straits Times reported that 10,000 to 13,000 trees could be removed over the next 15 years to make way for transport and housing projects.

NParks stressed that all the affected trees would be replaced at least one-for-one.