Mr Sebastian Kwek joined a gang at 12 and dropped out of school at 13. Over the next decade, he was arrested more than 10 times for offences such as rioting and going missing during national service.

Now, at 26, he is wielding a ladle. He has taken over his grandmother's ban mian (handmade noodle) stall in Changi and is even opening a second outlet at the end of the year.

He credits his two years working at casual French eatery Garcons with putting him on the straight and narrow. He was there from 2013 to last year.

"My father never cared about me and my mother died when I was a month old. When I met the people at Garcons, I felt I finally found the right friends," Mr Kwek said.

Working at Garcons meant he had no time to meet friends from his past. His mentor Enoch Teo, 26, who in 2012 founded E&I Food Concepts, the social enterprise that runs Garcon, hung out with him. 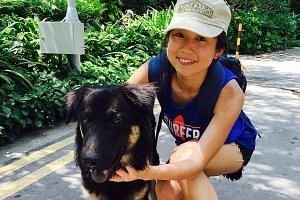 Last year, Garcons - which means "boys" in French - was featured in The Straits Times' Causes Week for the work it does in hiring and training troubled youths, many of whom are former offenders.

Then, Garcons had three outlets and had by then hired 20 of such employees. In the year since, it has opened two more outlets but closed one, and given jobs to six more employees. Mr Teo himself was once a delinquent teenager, arrested at 16 for breaking into a car.

The road for Garcons has been bumpy at times. Some of its hires had wanted to start fights with customers, said Mr Teo. Three employees have left.

He is not daunted and said he is now considering hiring those who have never offended but "are actually quite aimless". While they may have certificates from the Singapore Institute of Management or Singapore Hotel and Tourism Education Centre, they have never held a job, even into their late 20s.

Garcons' two new outlets are at Timbre+ and a shared space with One Man Coffee cafe in Upper Thomson Road.

There are some inspirational examples among the Garcons boys. One joined eight months ago with no food and beverage experience, but has proven so handy that Mr Teo is grooming him to be an outlet manager. Mr Teo hopes this youth follows the path of a former charge, who after a year at Garcons landed a spot at prestigious culinary school Le Cordon Bleu in Sydney.

Mr Teo's social enterprise was one of 14 efforts featured during last year's Causes Week, when The Straits Times showcased initiatives addressing issues such as disabilities, animal welfare, abuse, poverty and the elderly.

Causes Week returns this year for the fifth time, from Dec 5 to 11. Anyone with a story or cause to share for the betterment of society can write in for these stories to be featured in this newspaper. The hope is that more will be inspired to step up or contribute to the causes highlighted.

Said Straits Times editor Warren Fernandez: "With so much going on in the world, we run the risk of missing out on some of the good work being done by various groups out there. Our Causes Week is just one way we try to make space and time to focus on their efforts.

"Readers have told us they find these stories interesting and inspiring. We hope that through these stories, more people will come forward to pitch in, with their time and resources, for a good cause."

After Garcons' story ran last year, Mr Teo had people writing in asking if they could invest in the social enterprise. He turned the offers down. "Running a social enterprise takes a lot of understanding and commitment," he said.

A version of this article appeared in the print edition of The Straits Times on November 08, 2016, with the headline 'Rebel with a cause - he hires and trains troubled youths'. Subscribe
Topics:
More
Whatsapp Linkedin FB Messenger Telegram Reddit WeChat Pinterest Print Purchase Article Copy permalink