They may be getting on in years, but they still have the moves.

Elderly residents in Bukit Merah are keeping fit with a programme called Get Movin' For Charity, which conducts free zumba and other fitness classes at the Thye Hua Kwan Seniors Activity Centre.

Ms Jacqueline Tan, 34, was inspired to start the movement two years ago while volunteering at a centre for the elderly at Block 118, Bukit Merah View.

On one visit, she noticed an old man, whom she remembered as being quite happy and active, sitting listlessly in a wheelchair. When she asked what was wrong, he told her he was getting old and confided that he felt useless.

"I could see it was making him really unhappy," said Ms Tan, who works in asset management. "Most of these old people stay in one-bedroom apartments. They tend to become isolated and feel weak and tired." 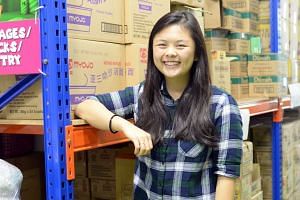 Ms Tan resolved to get these elderly folk back on their feet again. She enlisted her friend, freelance zumba instructor Cyndi Chua, to design a monthly dance class.

Ms Chua, 40, recalled: "The first lesson we had, a lot of the elderly were sitting on chairs. They weren't comfortable standing up or trying to move."

Two or three classes later, however, they were happy to see most of the elderly getting up to dance.

"Now, we have people in wheelchairs standing up, wanting to get fit and healthier," said Ms Tan. "They can stand for one hour, and even refuse to have breaks!"

Today, the number of regular volunteer instructors has grown from three to about 10. The classes are now conducted every fortnight on Saturday mornings in an open space outside the centre.

The classes usually draw a crowd of between 16 and 40, who dance to upbeat tunes such as pop hit YMCA, or Latin cha-cha music.

The volunteers are also incorporating new Super Body Super Brain training, which involves exercises that train the reflexes and the coordination of different muscle groups. These may involve throwing and catching tennis balls, for instance.

Mr Choo Lai Chong, 75, a retired electrician who has been a regular at the zumba classes from their inception, said in Mandarin: "Now, my legs feel much more energetic."

A proponent of active ageing, he hopes to convince more seniors to join the sessions. Many people think that they are old or sick and cannot do the activities, and end up not doing them, he said.

"It is bad when old people don't move," he said. "They give up more easily and start to rely on people to do things for them.

"You have to train your body yourself," he added. "Nobody can make you."

To find out more about volunteering with the programme, visit www.facebook.com/GetMovinForCharity