Singapore is set to double its greasy waste treatment capabilities by 2025, in line with projected population growth and an increase in the number of eateries here.

If not removed before entering sewers, greasy waste - a collective term for fats, oil and grease - can harden over time and clog them, potentially leading to overflowing sewers, pollution to waterways and public health risks.

At present, the island's only greasy waste treatment facility is located at Jurong Water Reclamation Plant and is run by national water agency PUB. Operational since 2008, it treats about 11,000 cu m of waste monthly, the equivalent of over 69,000 oil barrels.

PUB plans to build two new greasy waste treatment facilities in Tuas and Changi. Each will treat up to 12,000 cu m of waste per month.

The Changi facility will be built next to Changi Water Reclamation Plant, together with a new food waste treatment facility that the National Environment Agency (NEA) will operate. Construction of the greasy waste facility will begin in 2023 and be completed by 2025.

When co-digesting the three waste materials, a higher biogas yield is expected compared with digesting used water sludge alone. Biogas can then be used to generate electricity to power water reclamation plants. These benefits will be reaped in the upcoming Tuas Nexus, and PUB and NEA hope to achieve similar outcomes in Changi.

While the exact increase in biogas yield at the Changi Water Reclamation Plant has yet to be determined, PUB and NEA said in 2019 that a two-year trial showed that digesting food waste and used water sludge together can yield 40 per cent more biogas than digesting them separately.

By building a greasy waste and food waste facility in Changi, the carbon footprint of transporting such waste is reduced, as waste from the east can be brought to Changi while waste in the west will be processed in Tuas. Mr Ooi added that where feasible, the facilities will share amenities like odour control and hot water systems to help optimise land use. 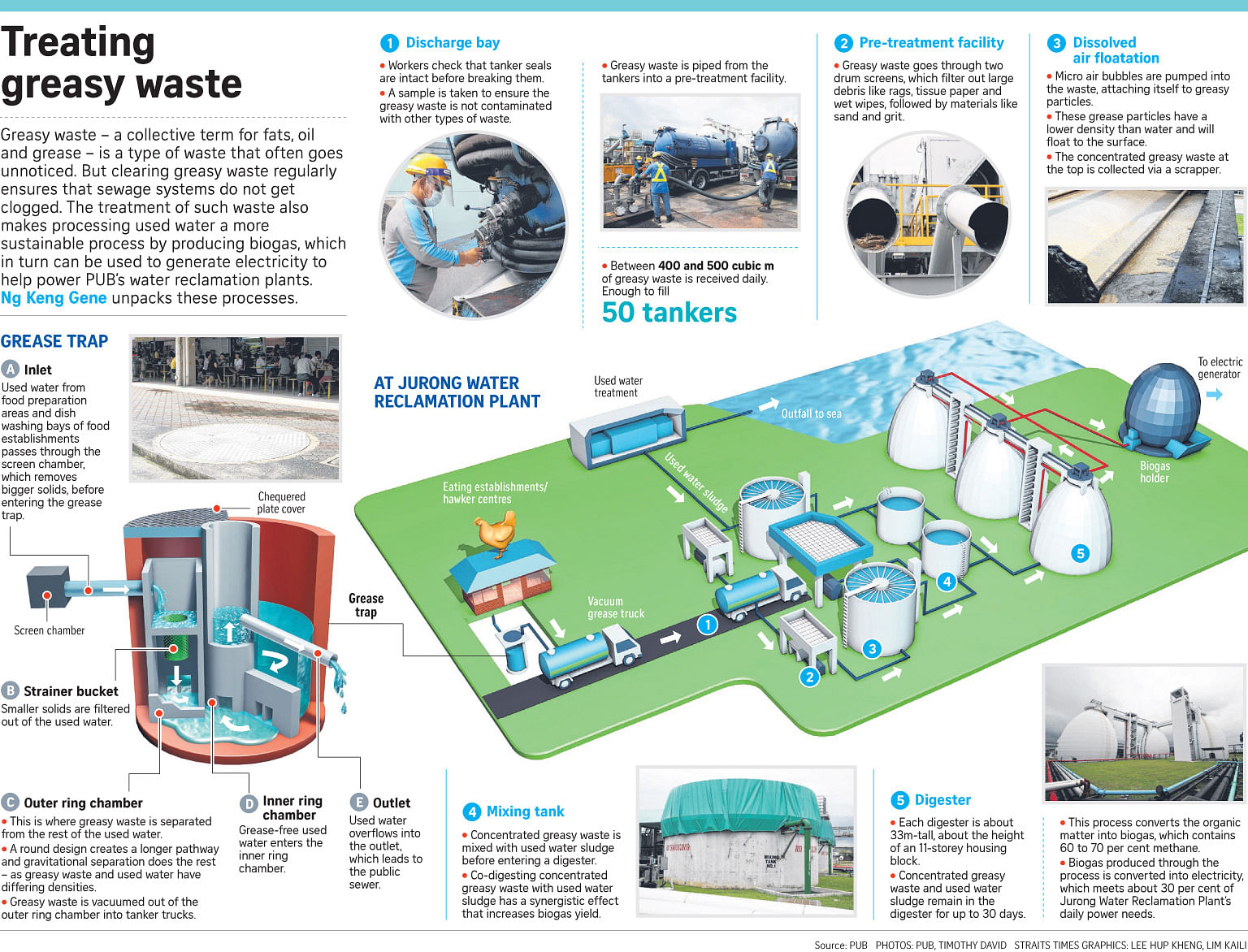 Currently, waste is removed from the traps and brought to Jurong Water Reclamation Plant in vacuum tankers for processing.

Mr Ooi said PUB attends to an average of about 90 sewer chokes a month, of which about a quarter are caused by grease build-up. Households are reminded that greasy waste such as used cooking oil should be bagged and disposed into bins and not poured down the sink.

Correction note: This article has been edited to reflect the correct name of Mr Ooi Kian Eng.

A version of this article appeared in the print edition of The Straits Times on May 31, 2021, with the headline 'Capacity to treat greasy waste to double by 2025'. Subscribe
Topics:
More
Whatsapp Linkedin FB Messenger Telegram Reddit WeChat Pinterest Print Purchase Article Copy permalink