SINGAPORE - Ms Annie Ng, 50, used to get up to 1,000 customers patronising her drink stall at the hawker centre located at the Old Woodlands Town Centre, which she ran for eight years.

But now, she sees fewer than 50 customers a day at her new stall at the Marsiling Mall Hawker Centre. It is where 80 per cent of the 68 hawkers from the old town centre have moved to.

"It is difficult to cover costs now," said Ms Ng, who used to start as early as 4am to catch the morning shift workers but now opens at 9am as there are no morning customers. She said she is paying 30 per cent more in rent now as well.

Like Ms Ng, several hawkers at the Marsiling Mall Hawker Centre, which is located in Woodlands Street 12, said business at the new hawker centre is slower.

Stall holders had to vacate their old premises last December to make room for the extension of the Woodlands Checkpoint.

Mr Cheah Kim Seng, 53, an employee at a tonic soup stall, said the lack of parking spaces at Marsiling Mall Hawker Centre, especially for motorcycles, has caused him to lose most of his old customers.

He said 80 per cent of his regular customers were motorcyclists from Malaysia coming in through the Causeway. 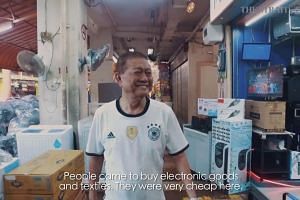 Farewell, Woodlands, gem of the north

The hawker centre is about 700m from Marsiling MRT station and 1.3km from Woodlands MRT station.

But Mr Cheah said residents living near Marsiling Mall, as well as customers who regularly turn up for dinner, help make up for the fall in customers during the day. "Business is not as good as before but we are still doing alright," he said.

Ms Azrin Amran, 33, an employee at a Malay food stall, said she has seen about a 30 per cent fall in the number of customers and about a 20 per cent drop in profits since she moved here.

"From 2pm to 5pm, there are very few people here. But at the old place, there were people throughout the day," she said.

She is looking forward to the Chinese New Year period, when she hopes there will be a larger crowd.

Marsiling Mall Hawker Centre was named as one of two hawker centres to be fitted with productivity-boosting initiatives. Visiting the hawker centre on Monday, Dr Amy Khor, Senior Minister of State for the Environment and Water Resources, said the initiatives, which include centralised dishwashing services, will improve the overall business of hawker centres.

Customer Choo Yuan Ling, 43, who is an administrator in an electronic factory and lives opposite the hawker centre, said the new location is more convenient for her.

"I eat here at least twice a week, and the food is not bad," she added.