SINGAPORE - A burning smell on a Tigerair flight that was consequently diverted to Ho Chi Minh City on Friday (Jan 6) has been traced to a faulty ventilation fan.

The affected passengers have been flown back to Singapore on a ferry flight, landing at about 3.30am on Saturday (Jan 7).

"Tigerair flight TR2993, carrying 163 guests from Taipei to Singapore, was diverted to Ho Chi Minh City on Jan 6 due to a burning smell in the cabin which was traced to a faulty fan in the aircraft's ventilation system after checks," Tigerair said in an statement on Saturday.

The aircraft has been serviced and is being taken back to Singapore.

Tigerair added that it deployed a ferry flight to bring the passengers back to Singapore from Ho Chin Minh City. 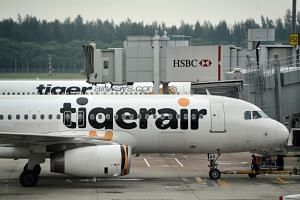 Tigerair said refreshments were provided to the affected passengers while in Ho Chi Minh City.

"We sincerely apologise for the inconvenience caused. Safety is of utmost importance to Tigerair and we will spare no effort in ensuring the well-being of our guests," it added.

Flight TR2993 had taken off from Taipei with 163 passengers on board at 1.55pm on Friday and was scheduled to land in Singapore at 6.55pm.

A passenger on the plane, Mr Chua Heng Tiong, 54, who is self-employed, told The Straits Times on Saturday that he landed in Singapore at about 4am.

He added that, in total, passengers waited from 5pm on Friday to 1am on Saturday.

"At first we were told to wait and were told it's a technical issue. They gave us dinner and directed us to the canteen to wait."

He said he felt it was not "a very ideal handling of the situation", as "nobody knew the time of the flight" back to Singapore and he had to call Singapore to find out.

However, another passenger, ST reader Mr Lam Wai Oon, praised the Tigerair crew, especially the pilot, for their calm handling of the situation.

The 45-year-old engineer told ST: "I was sitting at the fourth row and could smell something burning. The pilot was so cool in managing the entire emergency descent and the air crew acted as calm as possible."

"To be honest I was prepared for the worst," said Mr Lam. But he added that the captain consistently told passengers what to expect, including not to be worried if they saw fire engines on standby at the landing tarmac.

"Even though it was a situation that nobody wants to happen or can predict, the whole crew led by the captain was very professional and that gave me a very good impression of TigerAir," he said.

Mr Lam added that the passengers, whom he claims were mostly Singaporeans, were generally a docile bunch and did not make "unreasonable requests".

He added that it was his first time experiencing such a situation.