Nursing centres focus on residents' interests to give them choices, better quality of life Like Singapore, Denmark has a rapidly ageing population. The issue is serious enough for the Nordic country to appoint a Minister for Elderly Affairs for the first time in its political history.The Straits Times' Janice Tai visited two cities in Denmark - Copenhagen and Odense - to see how the Danes are tackling the issue, and the lessons for Singapore.

Picture a nursing home that cares for the elderly who are frail, and is housed in the same complex where independent seniors and students live.

That's one of the plans for eldercare in Copenhagen, the capital of Denmark. When completed in 2024, the Solund nursing home will have 360 care homes for weaker seniors, 150 apartments for young people and 20 units for the elderly who do not need any help.

It will even house a daycare centre.

The development, located next to Sortedam Lake, will include a kindergarten, community hall and cycling lanes within an area about half the size of a soccer field.

That's just one plan. Another will have the Danish government converting existing buildings such as churches and monasteries into eldercare facilities.

The St Joseph nursing home, in the same city, will have 92 new nursing home apartments next to a former church and monastery when it is ready in 2019. 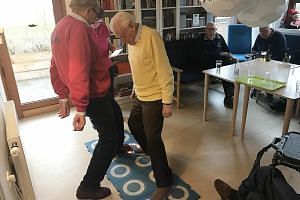 This way, its elderly residents will be able to dine and attend concerts and exhibitions in the vast church hall with its tall stained glass windows.

The neighbouring monastery will be converted to house able elderly people who do not need nursing help.

Like Singapore, the city of Copenhagen is rapidly ramping up the number of nursing homes to cater to rising demand from a growing ageing population.

It plans to build some 1,000 nursing home apartments within the next decade. There are about 3,500 such apartments now.

Ms Birgitte Bo Christensen, chief consultant at Copenhagen's Health and Care Administration, which runs the nursing homes, said: "We are experimenting with different types of nursing homes because we believe they shouldn't all look and feel the same. People have different identities and so should the nursing homes."

Nursing homes in Denmark are private apartments that come with the usual housing leases. Seniors buy the apartments as their own homes. The local authority, or municipality, is responsible for providing services and facilities for the elderly residents in the common areas surrounding these apartments.

Increasingly, the authorities in the city are moving towards imbuing a sense of identity in these homes.

Three years ago, it started looking at how it could create common spaces for older people who share certain interests, wishes and values.

It has since established six nursing homes with different "profiles" or focuses - music, gourmet food, sports, and animals and nature.

There is a "rainbow" nursing home for gay residents and another for ethnic minorities.

At Lindehaven Care Centre, there is a stimuli room where different colours and shades of lighting are used to regulate the body's natural circadian rhythm by mimicking daylight and night hours.

If a dementia patient is restless at night, staff will take him to a room filled with dim orange light to bring down his agitation or stress levels and help him fall asleep. If he is feeling sluggish during the day, white or bright lights help to stimulate his brain and give him energy.

Every week, they get a voucher that entitles them to half an hour of services, such as cleaning or getting the caretaker to read the newspaper to them.

The scheme, which started in Copenhagen, was so well-received that it was implemented nationally last month. Ms Thomsen said it's about moving away from relying on a one-size-fits-all solution.

"I believe in giving the old citizens more choices in life. Choices that not only concern physical help, but also the small things and decisions that enhance their quality of life," she said.