While some surveys show the divides of race and religion easing, others point to how class divisions are sharpening. In the second of an occasional series supported by the Ministry of Culture, Community and Youth, Senior Social Affairs Correspondent Theresa Tan explores how some young people and community groups are working to build a cohesive society.

Rental flat residents Marianna Bajuri, 42, and Suraiyah Mohamed Ghaus, 45, were initially apprehensive about mixing with their neighbours from the more affluent part of Whampoa estate.

Madam Marianna, who works as a cashier and is a divorcee with three children, said: "They have more money, are more successful and we worry that they think rental flat residents are low class."

But their worries were unfounded when they attended a picnic for Whampoa residents. Madam Suraiyah, a widow with five children, was so happy to be able to talk and joke with neighbours like lawyer Ada Chua, 26.

Ironically, what brought together the two sets of residents - those living in two-room rental flats and those in bigger flats - was tension at the start.

Some residents of the larger flats complained that youth from the rental flats were doing dangerous stunts and making noise late into the night at the estate's playground.

Last year, staff from Beyond Social Services, a charity, and volunteers from the Ministry of Culture, Community and Youth (MCCY) invited the two groups to gatherings for them to get to know each another, share their hopes for the estate and, in the process, resolve any tension.

Beyond community worker Izzaty Ishak said the playground complaints have eased. "My biggest takeaway is how important friendships are to build a community."

The One Whampoa community project has brought residents of different socio-economic backgrounds together.

Ms Chua, who lives in a condominium and went for the picnic, said she was impressed by the resourcefulness and talent of some of the children from poorer families.

The Whampoa project comes amid concern about growing social divisions, as highlighted by a recent Institute of Policy Studies (IPS) survey that suggested the sharpest social divide may now be based on class. Those who were polled could easily name a friend of a different gender, age, race or religion, but not so for someone from another class.

This class divide could lead to a sense of alienation between different social classes, noted IPS deputy director Gillian Koh, one of the study's researchers.

She offered this analogy: "Within a family, there may be siblings who do better than others. The question is, 'Do members of the family allow this situation to erode the sense of belonging or do they share their time and resources to benefit one another and develop a warm sense of all being part of one family?' "

Meanwhile, divisions of race and religion are still present - though observers note that these may be easing due to changing values and norms and a greater stress on diversity and inclusion.

Mr David Chua, chief executive of the National Youth Council, noted that the nationally representative National Youth Survey found that many young people have close friends of another race or religion.

Mr Chua said more young people are making a difference, for example, by starting projects that bridge social divides or improve the lives of the marginalised. 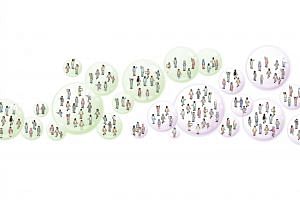 Who is your friend? Bursting social-class bubbles

Government concerned about lack of diversity in some schools, housing estates: Grace Fu

Dr Koh said its study found that the "most robust" avenues for social mixing were education, sports, cultural activities and volunteerism.

For instance, students from different schools get to mix when they go for Outward Bound Singapore's (OBS) outdoor expedition programme.

And some of these students have kept up their friendships even after their time at OBS, said Mr Chua.

Besides avenues such as OBS, there are projects organised to bring people of different backgrounds together, with government grants available for such efforts. An example is the MCCY's Harmony Fund, which supports ground-up projects encouraging racial and religious harmony. Since its launch in 2013, it has supported over 100 projects, including interfaith conversations and conferences.

Over at the National Heritage Board, its group director of museums Kennie Ting said the board has made museums more accessible and inclusive for different groups, like people with disabilities and senior citizens. For example, the National Museum of Singapore, Asian Civilisations Museum and Peranakan Museum have "Quiet Mondays", where they open one hour earlier than usual so that those with special needs can have the museums to themselves.

Still, there is only so much that the Government can do, those interviewed said. It is also up to the individual to want to bridge the divides.

With technological and other changes disrupting entire industries and resulting in major job losses, a person's financial standing and social class are no longer set in stone, Nominated MP Kuik Shiao-Yin noted.

This could drive some people to be more aware of and concerned about class divide issues, she said.

Despite the various divides, many things bind Singaporeans together, from shared experiences, values, places, heritage and even food, said those interviewed.

As Ms Kuik put it: "Singapore is home - for good and for bad. It's like family, even if your family is not perfect, it is still what makes your family your family."

A Muslim student called up Mr Abbas Ali Mohamed Irshad in 2012, saying she wanted to stage a protest against the growing anti-Muslim sentiments in the West.

But Mr Mohamed Irshad, 28, founder of the Singapore Management University's Islamic Business and Finance Society, felt what were needed were bouquets and not more brickbats.

"I felt we should take a step back and channel the negative feelings into something more positive," he said.

Roses of Peace, an inter-faith movement to promote peace and understanding, was thus born. In November 2012, about 100 young people handed out 3,000 roses to the public in places like Orchard Road.

It has since become an annual event. The non-profit group has tapped the Ministry of Culture, Community and Youth's Harmony Fund, which supports ground-up projects that encourage racial and religious harmony, to fund its activities. 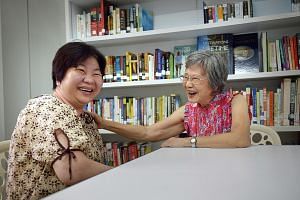 Angels in our midst: Caring for the less fortunate in Singapore

These include an inter-faith conference to give young people a chance to ask questions and to hear from people of other faiths.

Said Mr Mohamed Irshad, who is now a commodity trader: "Many are afraid to talk about religion as it's a sensitive topic. But we must address misconceptions, which will breed hatred, prejudices and divisions."

For example, he noted that some people are afraid of Muslims, given the negative impressions that have arisen as a result of terrorism linked to Muslims.

Mr Mohamed Irshad said this is needed as Singapore is not immune to terrorism, and how society reacts to the terror threat also depends on trust between the different races. "So we must get youth from different faiths to build friendships," he said.

Being Chinese Singaporean and part of the majority race here, Mr Lewis Liu has not been discriminated against because of his race.

But he felt he had to act when he came across a story online about landlords who said they preferred not to have Indian or Chinese nationals as tenants.

Mr Liu, 32, a senior consultant in an organisational development firm, said: "It's unfair that some people are discriminated (against) because of their race."

His wife, Ms Chen Liyi, 29, a manager in a consultancy firm, worries about the polarisation of views online. Everyone is talking but no one is listening, the Singaporean observed.

This was what got the couple to start last year a series of discussions over dinner, called More Than Just, to stress that people are more than just labels or stereotypes.

A total of about 90 people - a mix of races and nationalities - met over five sessions to discuss issues such as racism.

Mr Liu said: "It's important to have conversations so we can get to know one another as a person, instead of a stereotype."

The response from participants was positive, the couple said. Many felt it was cathartic to talk about the discrimination and hurt they felt. Others realised that their casual remarks or jokes could hurt others.

The couple tapped the Ministry of Culture, Community and Youth's (MCCY) Harmony Fund, which supports ground-up projects that promote racial and religious harmony, and the MCCY's Our Singapore Fund. The latter supports projects that build national identity or meet community needs.

For now, the Lius are not thinking of conducting more sessions due to work commitments.

However, they have set up a Facebook group called More Than Just, to discuss issues related to stereotypes and discrimination.

Ms Chen said of the dinner sessions: "I felt the participants had a better understanding of the plurality that exists among us."