When he was 12, Mr Tan Boon Kwang started helping out at his father's Teochew braised duck stall, which operated from a pushcart in Redhill.

He moved with his father to Redhill Food Centre when it was built in the early 1970s and since then, he has been running Redhill Lor Duck Rice and Noodle. His wife, 57-year-old Ong Ai Ling, has been helping him for the past decade.

Over the years, the stall has built up a steady following, with customers forming long lines during lunch hour to order the braised duck dish and clear herbal soup. It became even busier after the stall was recommended by the Singapore Michelin Guide 2016.

Having undergone a heart operation three years ago, Mr Tan cannot handle the physical demands of being a hawker.

He and his wife have already cut down their working hours - they now take three days off a week instead of one day, and they close the stall at 2pm instead of 8pm.

So far, there are no potential successors, said Mr Tan. A company had expressed interest in taking over the stall, but there has been no word yet. Their two children, a 32- year-old teacher and 30-year-old fitness trainer, have no interest in joining the industry. 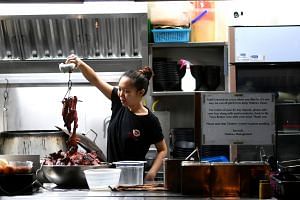 Hard slog must be worth it, say young hawkers 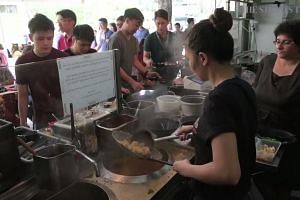 A day in the life of a Singapore hawker

Said Madam Ong: "Kids these days don't want to get up in the wee hours of the morning, or miss out on seeing friends during the weekend because of work. In the past, our families were poor so we all tried to earn money to help our parents.

"Of course it is a pity to see the stall close down, but we have no choice. Health is more important."

Asked about the Hawker Centre 3.0 Committee's report, the couple said that ultimately, what would keep customers coming back is the quality and taste of the food.

"If the food is good, you don't need Wi-Fi or performances. Our customers come from all over the island," said Madam Ong.

The couple are willing to impart their skills to the next generation, but stress that the work is not easy. "It'll be much easier if an aspiring hawker is passionate about the industry. But unless you are willing to put in the hard work, you won't learn anything," said Mr Tan.