He has burns on his legs and ear but is recovering well in a Singapore hospital, says his aunt

The three-year-old sole survivor of a horrific car crash in Johor on Christmas morning suffered second- and third- degree burns on his legs and slight burns on his ear.

But Evan Lim is in a stable condition and "recovering well" in a hospital here, said his aunt yesterday.

Ms Ng Khai Hiang, 36, spoke to reporters at his family's wake, which will end tomorrow afternoon.

His injuries should heal properly if he responds well to treatment, Ms Ng said. Otherwise, doctors have recommended skin grafting.

Evan's maternal grandparents are caring for him now, although relatives have not finalised his long-term living arrangements. 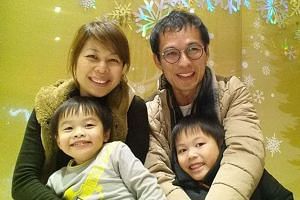 Father who died in Johor crash was once stateless, rebuilt life after struggle with drugs

BREAKING THE NEWS TO HIM

Physically, he's okay... I don't think he fully comprehends what has happened.... We have to be mentally prepared about how to share (the news) with him.

MS NG KHAI HIANG, Evan Lim's aunt, on how the child - the sole survivor in the accident - is doing

His aunts, uncles and cousins will be taking care of him together as well, Ms Ng added.

Evan's parents and older brother died after their Land Rover was believed to have hit a road signboard near Sungai Dohol bridge, close to Kota Tinggi, before colliding with a Toyota Corolla. The four of them were headed towards Mersing on the morning of Dec 25.

Both cars burst into flames, and the accident claimed the lives of Mr Barnabas Lim, 45, who owned a car-polishing business; Ms Kristen Ng, 39, a property agent; and their elder son Rayshon Lim, who was six. Their identification documents were said to be destroyed in the fire. The driver of the other car, a Malaysian woman, died in the crash as well.

Evan was reportedly pulled from the burning wreckage by motorists, and driven to Kota Tinggi Hospital by Kota Tinggi resident Yang Yu Hua. He was later transferred to Sultanah Aminah Hospital in Johor Baru for further treatment.

Officials from Singapore met him there, and his relatives set off to meet him that evening as well.

That night, the Ministry of Foreign Affairs (MFA) arranged for an ambulance service to bring Evan back to Singapore, Ms Ng said.

The family of four visited Malaysia often, according to Ms Ng and her husband Darius Liew, 36.

"If you look at their Facebook (page), you will know that they always go out together," said Ms Ng, who went to a mortuary in Kota Tinggi on Saturday to identify the deceased.

The family would go on boating trips and road trips, she added, and were "supposed to go for at least a week to Kuantan" this time.

Their trip started around 5am that day.

The victims' relatives were shocked to learn of the crash from the MFA. They also saw photos related to the crash circulating on social media.

Hoping that the news was not true, they immediately set out to verify the information.

"Our objective was to bring them back to Singapore. I think that was key for the last two days," explained Mr Liew.

The family is now focused on Evan's recovery.

Ms Ng and her husband thanked various parties that extended help to their family, including the MFA, members of the New Creation Church that the family attended, and motorists who stopped to help at the scene of the accident.

They also thanked those who helped to share news of the crash online, and a couple who cared for Evan when he was alone in the JB hospital.

"He was in pain, he was alone," said Ms Ng, who added that the couple, whose child was in a neighbouring bed, entertained Evan with a phone, shared their child's toys and fed him.

Asked how Evan is coping now, she said: "Physically, he's okay... I don't think he fully comprehends what has happened."

He has also been asking about his parents. "We have to be mentally prepared about how to share (the news) with him," said Ms Ng.