SINGAPORE - Would you pay to stay in a military bunk, eat combat rations and go on a route march?

More than 1,000 women of all ages jumped at the chance to do so, signing up for a women's boot camp to experience what national service is like.

Response for the overnight camp was so overwhelming that the organiser, Ang Mo Kio Women's Executive Committee (WEC), had to conduct balloting for the 100 slots up for grabs.

The camp, which the organiser promoted as a "golden opportunity" to go through NS activities, will take place from Sept 1 to 2 at Maju Camp in Clementi.

Participants will take part in a 3km route march, handle the SAR21 rifle and taste combat rations, among other activities. The women will also get to stay overnight in military bunks.

Each participant pays $55. PAssion card members get a $10 discount.

The camp was announced on July 17 in a Facebook post by the Women's Integration Network Council, which is the coordinating body for the 105 WECs in Singapore. The post attracted almost 3,000 shares and more than 2,000 comments.

Among the 100 who managed to secure a place for the camp, the youngest participant is 13 years old, while the oldest is 64, the organising committee told The Straits Times. The average age of the participants is about 29.

Ms Joanna Portilla, chairman of Ang Mo Kio WEC, said: "Through this camp, the organisers hope to give women a glimpse of what our national servicemen go through so that they can better relate to national servicemen's experiences and demonstrate stronger support and involvement in NS and defence.

"We are very grateful for the overwhelming response from the public. This shows that women are keen to play a part in supporting national service."

Those who failed to clinch a spot will be notified from Sunday (Aug 19) onwards. Ms Portilla added that the committee is open to the possibility of organising similar initiatives in the future.

The camp is part of an initiative by the Advisory Council on Community Relations in Defence (Accord) which facilitates initiatives from the community that better support national defence and NS, among other roles.

The success of the Dads for Life Camp, which saw more than 200 father-son pairs take part in an overnight camp at the F1 Pit Building last year, inspired Accord to suggest a similar experience for women, said Ms Portilla. That camp was organised by the Centre for Fathering.

Administrative executive Tabatha Lim, 19, will be joining the upcoming camp with a friend. 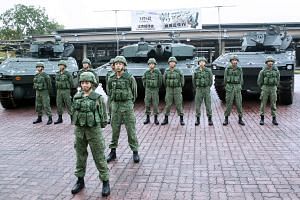 Real men don't look down on women in the SAF

Ms Lim, who is excited about being able to handle the SAR21 rifle, told ST: "I was really excited when I got to know about the boot camp as I have always been very curious about what it's like to serve NS.

"We spend a lot of time listening to so many stories from our male friends, brothers, fathers, and we never got to experience it ourselves unless we decide to sign on with the army. So this is the perfect opportunity to do so."

Civil servant Lee Yet Wei, 30, also applied to join the women's camp because she was curious about NS life, and what it is like to stay in the bunks. She said: "Such an opportunity doesn't always come by, and it is an experience I am looking forward to."