He had no idea anything was wrong until plane landed; the scare later turned out to be a hoax

Changi Airport Group (CAG) chairman Liew Mun Leong, who was on a Singapore Airlines flight which received a bomb threat, had no idea anything was wrong until after the plane landed at Changi Airport.

The scare later turned out to be a hoax.

Flight SQ001 from San Francisco, via Hong Kong, had arrived as planned at about noon on Sunday.

"After landing, I suddenly saw through the window that our aircraft was strangely taxiing away from Terminal 3 and towards the cargo area. It then stopped and was held up at the cargo apron for a long while," Mr Liew said in an e-mail to staff, with whom he shared his experience.

"'What in the world is happening?' I murmured to myself.  The captain announced that there was some problem at the gate but it should be cleared soon. There was no explanation from the control tower."

Mr Liew then rang an airport colleague to find out what was going on. "His rather calm response was shocking and terrifying. Someone had made a threat that there was a bomb on board SQ001!... I was asked by a fellow passenger what was happening. I didn't tell her what I knew as this might have unnecessarily alarmed her. 'Just extra security', I said." 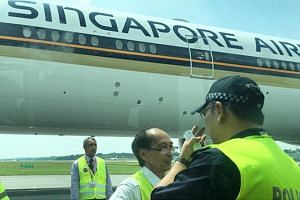 Another 20 minutes passed before the captain said there were some security problems which had to be cleared by the police before anyone could be allowed to disembark, he wrote.

After about an hour of waiting inside the aircraft, the captain announced that arrangements were being made for passengers to be taken by bus to Terminal 3.

Mr Liew said: "I thought the captain and crew handled the situation very well, such that all passengers remained calm even as the potential seriousness of the situation dawned on them."

At the terminal, passengers were "thoroughly" screened before they were allowed to leave. It took more than three hours after the plane landed for the check-in baggage to be released.

The same day, a Turkish Airlines flight travelling from New York to Istanbul was diverted to Halifax in Canada after a similar threat was made against it.

Mr Liew had initially planned to return to Singapore a day later but changed his flight to attend the funeral of a former colleague and mentor, Mr Somkiat Lertpanyavit.

Mr Somkiat, who had spent almost 43 years working as a master planner and designer for the development of Changi Airport, died at the age of 71 last Friday.

Despite the bomb scare delay, Mr Liew managed to see his friend one last time.

He said: "Someone from Singapore Casket called to hurry me as they had to close and seal the coffin by 2pm. I pleaded for a few minutes' grace. I arrived at 2.03pm and managed to bid farewell to Somkiat."