SINGAPORE - The body of Zimbabwe's former president Robert Mugabe will leave Singapore on Wednesday morning (Sept 11), five days after he died in a hospital here.

Leaders of the African nation, including Vice-President Kembo Mohadi, members of the ruling Zanu-PF party and other senior officials as well as family members attended a service at the Singapore Casket building on Tuesday.

Mr Adam Molai, who is married to Mr Mugabe's niece Sandra Mugabe, said: "We had a very touching ceremony... it was a very befitting mass, just to see off the body of president Mugabe."

Speaking to reporters outside the building, he added that Mr Mugabe's body will be carried home by a chartered flight on Wednesday morning.

Mr Mugabe, 95, a controversial leader who ruled his country for almost 40 years, will lie in state at two different locations in the capital of Harare.

Zimbabwe's Information Minister Monica Mutsvangwa said his body will lie in state at Rufaro Stadium and then at the National Sports Stadium for a total of three days.

Ms Mutsvangwa did not say where Mr Mugabe will be buried, saying more updates will be provided "as more information on the programme trickles in".

Presidential spokesman George Charamba and Deputy Information Minister Energy Mutodi had said at the weekend that the former authoritarian ruler would be buried at the National Heroes' Acre, a site reserved for people that the Zanu-PF party viewed as having served the country with distinction during and after the 1970s war of independence. 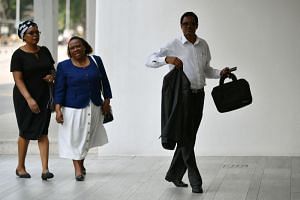 But it was reported earlier that Mr Mugabe's family is pushing back against the Zimbabwean government's plans and wants him to be interred in his home village of Kutama, 85km from Harare.

The burial ceremony will take place on Sunday, the day after a state funeral in the National Sports Stadium, said the Zimbabwean government.

Mr Mugabe was the first post-independence leader of Zimbabwe who was initially lauded for liberating his country from white minority rule. But his regime later came to be remembered for crushing political dissent and policies that ruined the economy.

Mr Mugabe died at Singapore Gleneagles Hospital, where he was seeking medical treatment.

Mr Molai, when asked on Tuesday whether Mr Mugabe was bitter when he was ousted, said: "You know what, everybody's human. When you go through an experience of that sort, of course you'll feel pain."