The bodies of all 10 sailors from the USS John S. McCain who went missing after it collided with an oil tanker near Singapore on Aug 21, have been found within the vessel.

In an update yesterday, the US 7th Fleet said US Navy and US Marine Corps divers have recovered the remains of all 10 sailors who had served on board the guided-missile destroyer. "The incident is under investigation to determine the facts and circumstances of the collision," the statement added.

The Maritime and Port Authority of Singapore (MPA) said recovery efforts have ceased, as the missing sailors have been recovered.

The collision between the USS John S. McCain and the Liberian-flagged Alnic MC left 10 missing and five navy sailors injured. It damaged the US warship's left side, near the stern, punching a hole that stretched above and below the waterline. 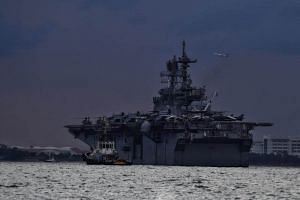 5 burning questions on the collision of USS John S. McCain in waters near Singapore

Singapore continued to support the US Navy in its search on the vessel at Changi Naval Base until all missing crew were accounted for, MPA added.

Mr Andrew Tan, MPA chief executive, said that on behalf of all agencies involved in the search-and-rescue operation, the authority expressed its "deepest condolences to the families and loved ones of the deceased US Navy crew".

Calling the incident tragic, Defence Minister Ng Eng Hen said in a Facebook post yesterday: "We hope and pray that this final closure will help their bereaved families through this difficult period. May their souls rest in peace." A version of this article appeared in the print edition of The Straits Times on August 29, 2017, with the headline 'Bodies of all 10 missing sailors found within US warship '. Subscribe
Topics:
More
Whatsapp Linkedin FB Messenger Telegram Reddit WeChat Pinterest Print Purchase Article Copy permalink