A grand plan is in the works to shape the development of Singapore's premier shopping belt over the next 15 to 20 years.

The authorities are looking into implementing an "actionable Orchard Road Blueprint" within that period, said a joint statement from the Urban Redevelopment Authority (URA) and Singapore Tourism Board (STB) yesterday.

To that end, both agencies are conducting a six-month study into the prime retail and office district, a spokesman for the two agencies said in response to queries about a public tender launched on Monday.

The tender called for proposals for a business study on Orchard Road, with an optional component of assessing up to "four strategies" for the area. The statement did not elaborate what these were.

Said the spokesman: "The goal (of the study) is to strengthen Orchard Road's positioning, offerings and visitor experience. This is part of the ongoing effort to study how Orchard Road can be developed into a vibrant lifestyle destination where Singaporeans and visitors alike can enjoy a signature street experience in a city garden."

The findings and recommendations from the study will be incorporated into the blueprint meant to guide the development of Orchard Road over the next two decades.

Said the spokesman: "This blueprint will be shared for public feedback once ready." 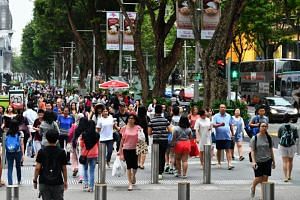 Plans to refresh Orchard Road's streetscape were announced earlier this year, including a notable idea to make the area a car-free zone in the long term.

The agencies have worked with stakeholders on some "immediate-term initiatives", including the use of the Grange Road open-air carpark for a creative pop-up event, the statement said.

The ongoing Flashbang street market, which ends on Dec 30, features some 120 retailers and food and beverage operators.

The statement said Orchard Road also features enhanced programming and events, including a Christmas village at Ngee Ann City Civic Plaza as part of this year's Christmas On A Great Street.

A scramble-walk trial at the junction of Cairnhill Road and Orchard Road, similar to that in Tokyo's Shibuya district, will "facilitate access to enhanced programming and enhance street-level vibrancy", it added.

The trial will take place on weekends and public holidays from tomorrow until Jan 28 next year.

By the end of next year, a design incubator to showcase and groom local brands and designers will be built at Orchard Green as well.

JTC Corporation will be calling for proposals by the first quarter of next year for an operator to manage the incubation space.

Orchard Road Business Association (Orba) executive director Steven Goh said the association and stakeholders had been involved in "a series of engagements leading to this study of the rejuvenation of Orchard Road".

Improving the walkability of Orchard Road and relaxing zoning restrictions are among the suggestions that Orba has provided during these closed-door sessions, said Mr Goh.

"We are excited that the Government is engaging consultants to undertake this blueprint. We will work closely with URA and STB to see what else they need from us," he added.

Orba is "happy with the progress" in the remaking of Orchard Road, first announced by Minister for Trade and Industry (Industry) S. Iswaran in April.

"Human traffic is extremely high this year, a sign that people are returning to Orchard to shop while tourists are being drawn by the festivities," said Mr Goh.

If the scramble crossing trial is successful, Orba hopes the authorities can implement this at the Orchard Road intersections with Bideford Road and Paterson Road as well, he added.

A version of this article appeared in the print edition of The Straits Times on December 15, 2017, with the headline 'Blueprint to add buzz to Orchard over next 20 years'. Subscribe
Topics:
More
Whatsapp Linkedin FB Messenger Telegram Reddit WeChat Pinterest Print Purchase Article Copy permalink