It will roll out 500 bicycles with features like smart locks, and upgrade mobile app to let users locate nearby bikes

ofo, the bike-sharing firm operating here, is taking steps to address the misuse of its rented two-wheelers, joining its rivals in the fight against such abuse.

Since the brightly coloured two- wheelers first began appearing on the streets here in the beginning of the year, photographs have circulated online showing shared bicycles chained up outside Housing Board flats, and thrown into drains.

Yesterday, ofo announced a slew of changes to its bicycles and app, addressing concerns of misuse and aiming to improve user experience.

The Chinese firm said it will progressively roll out 500 new bicycles with features such as smart locks. Users can unlock the bicycles by scanning a QR code, instead of the number lock on its existing bikes.

It is also rolling out an upgrade of its mobile app to allow users to locate nearby bikes. But this feature cannot be used to locate its older bikes, which are not GPS-enabled. 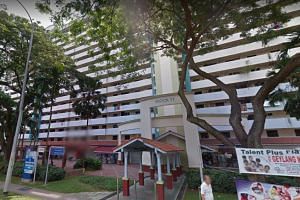 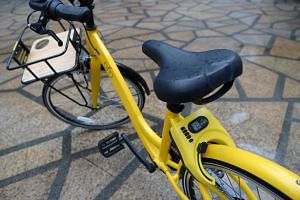 Bicycle misuse: How other bike-sharing firms are preventing thefts and abuse 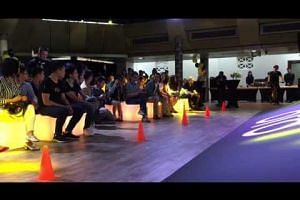 An ofo spokesman said the firm is also working on using geo-fencing technology "to lead users to park within designated areas", though this feature is still under development.

Cyclists displaying the new Ofo bicycles at a press conference

The new features put ofo's bright yellow two-wheelers in line with those of its two competitors, Mobike from China and Singapore-based oBike. Since they began operating earlier this year, bicycles from Mobike and oBike have included features like GPS tracking and QR code-enabled smart locks.

The absence of these features have led to ofo bicycles, in particular, being prone to abuse. For instance, users have noted that the combination code on the existing number lock does not change, allowing the bikes to be used without even logging in on the app.

Since Tuesday, users of ofo bicycles have also been required to make a one-time deposit of $39 on registration, with rides charged at $1 per hour and capped at $2 for an entire journey. Users did not have to pay for registration previously.

Fines would only add to our operation costs unless the rules are tweaked to the actual perpetrators bearing the costs instead.

Mr Cao said: "These enhancements and upgrades have been implemented based on user feedback, and we are confident that they will address current issues to ensure everyone gets the opportunity to enjoy a truly seamless riding experience."

Ms Elin Mah, the firm's regional manager, said "fewer than 1 per cent" of its "few thousand" bikes are abused here.

The changes come as the authorities are working to regulate the local bike-sharing boom.

Last week, Channel NewsAsia reported that the 15 town councils run by the People's Action Party are working on a common regulatory framework for bicycle-sharing, as well as riding and parking.

Measures could include having errantly parked bikes towed away, with operators having to bear the cost of retrieving and storing.

While ofo welcomed the proposed regulations, it hopes users will observe the guidelines. But oBike general manager Elgin Ee said such measures could raise operational costs and hinder expansion efforts.

"Fines would only add to our operation costs unless the rules are tweaked to the actual perpetrators bearing the costs instead," he added.

Mobike said regulations will not hinder the firm's expansion here, adding that local regulators have been "hugely supportive".

A version of this article appeared in the print edition of The Straits Times on May 25, 2017, with the headline 'Bike-sharing firm ofo hitting the brakes on misuse'. Subscribe
Topics:
More
Whatsapp Linkedin FB Messenger Telegram Reddit WeChat Pinterest Print Purchase Article Copy permalink