SINGAPORE -  Ill-fitting equipment and having to travel to a specialist for rehabilitation treatment might become a thing of the past, with a new Centre of Excellence for Solider Performance that will look at individual soldiers and their specific needs.

Designing better soldier systems and injury management are two of the four focus areas at the centre, which was inaugurated on Friday (Dec 1). The other two areas of focus are mental strength and tailored fitness regimes and diets.

One of the first achievements of the centre is a next-generation load-bearing system for soldiers to carry military gear such as water-bottles and ammunition. It is expected to be rolled out in the first quarter of 2019.

The system has a new hip belt, which can be customised to size and worn separately from a soldier's vest. This helps to distribute some of the weight carried to reduce strain on a soldier's shoulders.

It will gradually replace the current integrated load-bearing vests, which have been in use since 2009.

The head of CESP, Senior Lieutenant-Colonel Yee Kok Meng, said: "For the first time, we are deliberately using human factors engineering, and we can see that CESP has that expertise within our set-up to put it into the (load-bearing system's) design phase."

Human factors engineering is the application of principles, data and methods from research in ergonomics to designing devices and systems for human use.

SLTC Yee added that trials were conducted with active units to get their qualitative and quantitative feedback for further refinements to be made.

The new load-bearing system is the first to be designed with the help of the Load Effects Assessment Programme, which was acquired from a vendor two months ago. The programme helps to evaluate the impact of equipment on a soldier when he is put through an obstacle course, including movement and heat analysis.

Dr Angela Tan, 37, a human factors engineering specialist at CESP, said: "Before CESP... the focus was more on the systems and performance. Now, we will put the soldier at the centre of our equipment and make sure that the things that the army procures for our soldiers fit them." 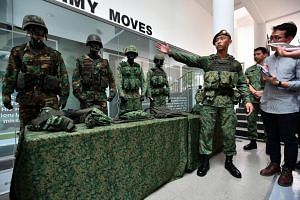 On injury management, LTC (Dr) Gorny Alexander, 37, who is the head of soldier development at CESP, said that with the centre's work, injured soldiers can be treated earlier and in the best way possible. This is important as the training time available for full-time national service is limited, he added.

LTC (Dr) Gorny graduated from the National University of Singapore medicine faculty and has two master's degrees, one in sports and exercise medicine, and another in public health.

Rehabilitation is also set to become more convenient. Said LTC (Dr) Gorny: "The concept of rehab-in-unit is that you don't have to go somewhere - to the hospital or an external clinic - (for) your rehabilitation care."

Physiotherapists and doctors will go to ground-level units instead, and unit commanders will also be trained to provide the right level of care, he added.