With crowds thronging the fairgrounds nightly, it looks like business is booming for hawkers at the ongoing Geylang Serai Bazaar.

But many say rentals have soared to an all-time high, and they are concerned about the sustainability of the festive event, held in conjunction with the month of Ramadan.

The rent for the more than 900 stalls at the bazaar - which stretches mainly along Geylang Road and Engku Aman Road - vary depending on the location.

Rents for food stalls go to as high as this sum for a single 9ft by 9ft space.

Rents for retail stalls, such as clothes stalls, are up to this amount.

The rental price is for the entire bazaar duration until June 24, the day before Hari Raya Puasa.

The escalating rentals have been blamed on the increasingly high bids placed for the rights to run the Geylang Serai Bazaar.

Regular stall owners say it is because of a battle between two big players - Mr Tay Khoon Hua, manager of Venture Trade Fair, and Mr Alan Toh of Ability Trade Fair - who have, over the years, won rights to the full bazaar.

The trade-fair organisers are chosen via two tenders called by a working committee under the Geylang Serai Citizens' Consultative Committee (CCC) and approved by the People's Association.

Ability won one with a bid of $1.79 million, while Venture won the other with a $1.56 million bid. Both were the highest bids.

Mr Eric Wong, chairman of the Geylang Serai CCC, said the bids submitted have recently been increasing by 10 per cent annually. He said the fair site is in demand, owing to its vibrant atmosphere, good location and high footfall. 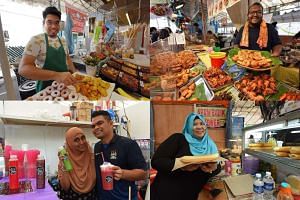 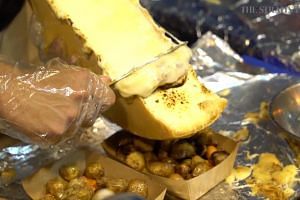 Hari Raya bazaar offers a feast for the senses

Mr Tay said that competition for the tender was stiff, so he nearly doubled his bid for the same space from last year's winning bid of $800,000. He said he had to raise rentals to pay for the higher bid, but there was no lack of interest when he raised his food stall rentals by $3,000.

"Most of the food stalls are run by young people. They are not as concerned about the rent as they are about whether their products can attract crowds," he said.

Mr Tay said his profit margin is 5 per cent to 10 per cent.

Mr Wong said if stalls are not rented out because prices are too high, bid amounts will come down. "We cannot meddle with prices. It's (left up to) market forces," he said.

The high rentals have already put some off. Mr Mohamed Azmi, 49, who has rented a stall about five times in the last decade to sell clothes, decided to sit out this round. "It's risky. Clothes don't sell until the second part of Ramadan," he said.

Those renting stalls are unsure if they will turn in a profit. Mr Suriyah, who spoke to ST last Thursday, said: "While about 15 days have passed, I have not even covered half of my rental. We are still wondering how it is going to be."

Mr Kwek said: "The rental is expensive, but the sales here are good. But we will wait until the end of the month to see."

They both rent from Ability.