SINGAPORE - The barricades in front of the upcoming Apple Store at Orchard Road’s Knightsbridge mall came down on Wednesday night (May 3).

But the store has not been unveiled. Instead, three icons - Apple, Love, Red Dot - adorn the tall store’s tall glass doors. It means Apple loves the little red dot, or Apple loves Singapore. There is also the wording Apple Orchard Road - the official name of the Apple retail store - below the icons.

In addition, there are 12 smaller groups of these icons close to the doors of the store. Each group of icon has a different red dot to represent the 12 local Creative Pros that Apple has selected.

Dubbed “Red Dot Heroes” by Apple, these Creative Pros are the liberal arts equivalent of Apple’s technical Geniuses that specialise in troubleshooting and repairs of products.

Some of them will conduct free hands-on sessions at the upcoming Apple Orchard Road Store. These sessions, collectively called Today at Apple, will be launching progressively in all Apple Retail Stores across the world this month. 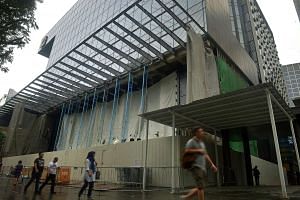 Singapore's Apple Store to open in May after construction delays: Report 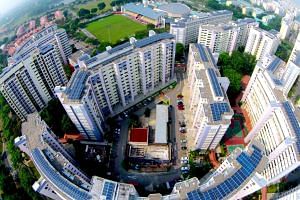 The Apple Orchard Road store will certainly be one of the first stores in the world to have these sessions when its doors finally open.

Mr Aik Beng Chia, one of the local Creative Pros, said: “I’m pretty stoked to be able to share what I see, impart my knowledge using my iPhone camera to fellow Singaporeans.”

Apple’s vice-president of retail Angela Ahrendts has said previously that Apple does not merely view their retail spaces as stores, but as modern-day town squares where everyone is welcomed.

The Straits Times understands that the Apple Orchard Road store will be opening soon, but no specific date or time has been provided.

But with the unveiling of the Creative Pros, the opening of Apple’s first retail store in South-east Asia seems imminent.