Many Asian markets took a minor hit yesterday after a widely expected rise in United States interest rates and strong signals that plenty more are on the cards.

Investors had largely priced in the US rise - the eighth since 2015 - but jitters over the escalating United States-China trade war took their toll.

Japan, Hong Kong and Shanghai all fell less than 1 per cent while Shenzhen shed 1.26 per cent, but Singapore rebounded 0.7 per cent before giving back gains to finish just 0.09 per cent lower.

Investors had plenty to focus on after the Federal Reserve made its interest rate announcement on Wednesday.

Apart from hiking the overnight lending rate by a quarter of a percentage point to a range of 2 per cent to 2.25 per cent, they projected one more rise before the end of this year and three next year.

The Fed also raised its forecasts for the US economy and signalled the end of the "accommodative" policy era that involved several rounds of economic stimulus to support the economy after the 2008 crisis.

One early response was a slight rise in the US dollar against the Singdollar as traders saw Fed signals that rates will rise enough to further strengthen the greenback. 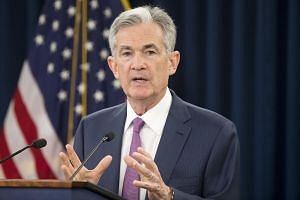 Many Singapore businesses will be eyeing rising interest rates with concern, given they mean higher borrowing costs. Exporters will be worried given they are already juggling challenges from the escalating US-China trade war and the emerging markets currency crisis.

Singapore-based Asia Polyurethane Manufacturing now buys more stock from China and pays in yuan. Previously, it bought from the US, Japan and South Korea and paid in US dollars. "The yuan has depreciated against the US dollar, which means we can buy more cheaply, and pass on those cost savings to our clients," said chief executive Erman Tan.

"However, this expected benefit is not likely to fully offset negative impact from the rise in interest rates as the US economy is increasingly inward-looking," he added.

Property experts said higher interest rates are unlikely to have a significant impact on buyers' ability to secure mortgages.

The total debt servicing ratio qualification for loans is assessed at 3.5 per cent, MoneySmart chief executive Vinod Nair said. This provides a buffer for any potential short-term interest rate fluctuations.

"Rates have been below 2 per cent for a decade now, and are still lower than the HDB concessionary rate of 2.6 per cent," he noted.

The three-month Singapore interbank offered rate (Sibor), which is widely used to price mortgages, was at 1.64326 per cent yesterday, up slightly from Wednesday. The three-month swap offer rate (SOR) was at 1.66131 per cent, down from 1.69599 per cent on Wednesday.

Mr Vinod noted that home owners are looking to switch to fixed rates: "Current fixed rates are still available at below 2 per cent for a two-to-three-year period, just slightly higher than floating rates offered."

"The correction in property would have been more painful if the government had not stepped in with the cooling measures, and interest rates started to climb," he said. "But the tighter loan-to-value limits mean individuals are now borrowing less, and they are therefore not as highly leveraged when borrowing costs rise."