Together with the 10 Asean countries, they form the expanded ADMM-Plus platform.

The ministers' three-day meeting in Bangkok, which ends today, also saw the adoption of more initiatives to boost information sharing and reduce the risk of miscalculations.

These included the terms of reference for the Asean "Our Eyes" Initiative, an Indonesian-led platform for counter-terrorism intelligence-sharing, as well as the Guidelines for Maritime Interaction to facilitate the peaceful management of tensions that could arise at sea.

The Asean ministers also signed a declaration on sustainable security, underscoring their commitment to cooperate on it.

Defence Minister Ng Eng Hen, who is attending the meeting, yesterday said the launch of new cooperation initiatives are a good sign for Asean. 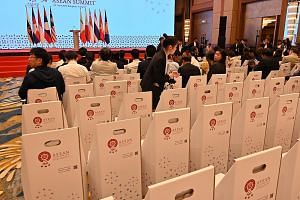 "I think the overall picture is that this is a security grouping that is dealing with challenges that individual countries or all countries face, and then over the years promulgating measures to deal with them."

Speaking to reporters on the sidelines of the meeting, Dr Ng also said the ADMM has made good progress since its inception 13 years ago.

The current consensus among defence ministers and think-tanks outside Asean that the ADMM is a credible group was not a given when it was formed, he noted. The very fact that we not only have consolidated on some issues... but on the main issues, is a good sign of progress.

DEFENCE MINISTER NG ENG HEN, saying that the ADMM has made good progress since its inception 13 years ago.

"The very fact that we not only have consolidated on some issues... but on the main issues, is a good sign of progress," he said.

He added that the combined militaries of the 10 Asean countries and eight ADMM-Plus members account for the majority of the world's troops.

Separately, on the sidelines of the meeting, Dr Ng met Thai Deputy Prime Minister and Defence Minister Prawit Wongsuwan. Both sides reaffirmed the close and longstanding defence relations between their countries, the Defence Ministry said.

The ADMM Retreat and ADMM-Plus meeting, which will involve all 10 Asean countries and the eight ADMM-Plus members, will be held later this year.