If the Ice Bucket Challenge sends chills up your spine, imagine doing it every day for a week.

Which was what I had to push myself to do in a guesthouse in Bhakunde Besi, a town about two hours by car from Nepal’s capital of Kathmandu.

There was no water heater, no Wi-Fi access, power outages were frequent, torches were a necessity, and going out at night was met with a warning to watch out for tigers. Not that I wanted to leave the cold comforts of the OM Guesthouse for outdoor temperatures of 8 deg C.

But the guesthouse is already considered luxurious when compared to the living conditions of the villagers since the April 25 earthquake. 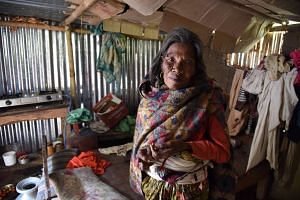 Many houses are nothing more than rubble now, and families have to put up with cramped shelters.

I was there for a week with 19 volunteers from all walks of life. They came together under YMCA of Singapore’s Rebuilding Communities Programme to build shelters for affected villagers.

Despite their problems, the villagers always wore a smile, greeting us “namaste” with hands clasped. Their resilience was impressive, but what moved me most was their generosity, despite the little they had.

During an interview with 27-year-old teacher Dharma Prasad Khanal, he prepared tea and plucked persimmons and guavas as sweet treats for us.

His two-storey brick-and-mud home was no longer safe to live in after the quake, so his family stayed in a makeshift shelter until September.

“But I decided to move back in, because there was no door in the shelter and there are tigers out there,” said the father of three. “We only sleep on the first floor though, near the door, so if there’s another earthquake, we are ready to dash out .”

He had planned for all three of his children – Aashish, eight, Akrite, five, and Avash, three – to attend an English school, but now only one of them can do so because that is all he can afford.

Mr Khanal used to earn US$50 (S$71) a month but was without work for two months after the school he taught in collapsed. He also sells milk at the market to try to make ends meet. But “I am just so happy to be alive”, he said.

For 32-year-old farmer Kamala Shrestha, her stone-and-mud house was flattened. The mother of three borrowed money from relatives and friends to cobble together a temporary house with zinc sheets.

She sacrificed a chicken to whip up her own special dish of  curry chicken after several of the volunteers and I helped out in her rice field. It was just her way of showing gratitude, she said.

The volunteers appreciated every little kindness they were shown.

There were no complaints about the rural conditions in the village. Instead, the volunteers were thankful for beds and said this was “much better” compared to other places they volunteered in, where they slept in sleeping bags on cold, hard concrete floors. They also joked that the cold was a good excuse for them to skip showers.

In the village, it usually turns pitch-dark by evening, so we always returned to the guesthouse by 5pm and had dinner soon after. On nights when there were no official “debriefs”, volunteers would gather at a common space for a chit-chat or play games, as there was no Internet or television.

But what Bhakunde Besi lacks in modern comforts, it more than makes up for with its breathtaking scenery of rice terraces in hues of yellow and green and vast stretches of land against a mountainous backdrop.

After the week-long service trip, we spent a day in Nagarkot, about 30km from Kathmandu. Nagarkot is famous for its Himalayan views, and we witnessed a magnificent sunrise and got a sneak peek of the Langtang mountain range, thanks to the clear weather.

If this trip highlighted one thing to me, it was how nature could be both beautiful and cruel.