AMMAN - Singaporean Amrullah Mohd Zain, 22, is in the middle of exams for his undergraduate course in Islamic jurisprudence at Yarmouk University in Irbid.

But on Saturday, he and 60 fellow students took a 90-minute bus ride down to Jordan's capital city to meet visiting Singapore leaders.

They were among 100 Singaporeans studying in Jordan who had a dialogue in the evening with Environment and Water Resources Minister Masagos Zulkifli and MP Intan Azura Mokhtar. They also met Prime Minister Lee Hsien Loong, who is on a visit to the Middle East, at a reception after the dialogue.

Mr Masagos fielded questions on recent developments, and told reporters after the closed-door dialogue that the students are aware they have a role to play in guiding the community as well as contributing to Singapore's social harmony.

By coming to the Middle East, the students are able to deepen their technical understanding of the religion and build their credibility. But having gone through formal Islamic education up to pre-university in Singapore, they are also grounded in practising their faith in a multiracial context, he said. 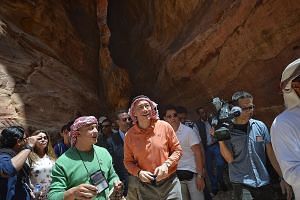 Mr Masagos added that returning students should know how to contextualise Islamic teachings and at the same time, inoculate the wider community against radical persuasions.

The Islamic Religious Council of Singapore (Muis) has been active in engaging several hundred Singaporeans studying in the Middle East, and officers stationed at Singapore missions in Cairo and Jeddah ensure their needs are taken care of, especially in emergencies, Mr Masagos noted.

They help Muis keep in close contact with them, update them on happenings back home and "make sure that they understand and not just read things from the Internet, and then interpret it any way the Internet is persuading them to", he added.

Several of the students at the dialogue had concerns about whether Islamophobia, or anti-Muslim sentiment, was becoming more common.

Mr Masagos said it was in the Muslim community's interest to make sure it interacts with wider Singapore society in a meaningful way so that interactions between people of different groups, even at the individual level, contribute to building trust.

And when the students return to become religious leaders at mosques and madrasah, they have a duty to guide the community on this front.

"They understand that while Islamophobia is something that could happen because of information that others may have about Muslims around the world, we can change that, we can prevent that from happening in Singapore," he said.

He also said beyond the religious field, the students' mastery of Arabic and having lived in the Middle East can be an advantage to Singapore companies in this region, and he has spoken to companies like Keppel, Hyflux and Sembcorp to look at tapping their expertise and taking them into the industry.

At the reception after the dialogue, PM Lee, who is on his first visit to Jordan, urged students to stay in touch with friends, family and developments in Singapore, saying: "We are all part of the Singaporean family."

He spent an hour and a half speaking to the students, asking them questions from their fluency in Arabic to how they coped with the cold winters - temperatures in Irbid fell below zero earlier this year.

Students shared their views and updated him on the volunteer work they were doing.

Mr Amrullah shared how Singaporeans on his campus were raising funds to provide meals to children of Syrian refugees near their city. Jordan has a large number of refugees affected by conflict in its neighbours.

Ms Zahratur Rofiqah, 22, who is in her third year studying jurisprudence at the University of Jordan in Amman, shared how she teaches English to Palestinian children near the capital once a week. She hopes to go into social work when she returns to Singapore.

"Helping others helps us fulfil a spiritual need," she added. "As Muslims, it is also important to be a voice for love, peace and restraint, and there are things we can do to nurture mutual understanding and respect among Muslims and non-Muslims."