It is being transformed into a model walking and cycling town; roads to cede more space to cyclists

The ongoing transformation of Ang Mo Kio into a model walking and cycling town could pave the way for the rest of Singapore in the drive towards a car-lite society.

Prime Minister Lee Hsien Loong said this yesterday, after marking the completion of the project's first phase, which includes a new 4km biking route, cycle ramps with slow- down rumble strips, and road markings so motorists can better watch out for cyclists and pedestrians.

Cycling paths are also painted red to better set them apart from footpaths, and this is one of several unique features in Ang Mo Kio, with plans afoot for roads to cede more space to cyclists.

Said Mr Lee, who took a bike ride on the new 4km path which loops around Avenues 1, 3 and 8: "I think this is going to be a success and we will do this in other towns as well, so that we can encourage people to ride more on bicycles, need cars less and also save money, and become healthier."

While the full transformation of Ang Mo Kio will take another three years, the Land Transport Authority (LTA) told The Sunday Times that Tampines has been earmarked as the next walking and cycling town. 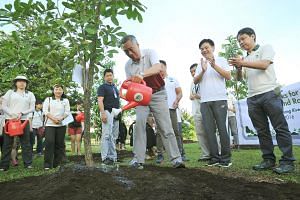 Phase 1 of 150km green trail will start at year end

During the event at Teck Ghee Community Club, PM Lee, who is an MP for Ang Mo Kio GRC, also announced the start of work on the first 60km of a 150km green corridor called the Round Island Route.

This will add to the over 300km- long Park Connector Network, enhancing connectivity and creating more recreational space. The first leg, the Coastal Adventure Corridor, will link Lower Seletar Reservoir Park with Gardens by the Bay, passing along the coasts of Punggol, Pasir Ris, Changi and East Coast Park.

In Singapore, cycling accounts for just 1.5 per cent of all commutes but the plan is to increase this to between 3 and 4.5 per cent in the next five to 10 years. A raft of measures to encourage people to cycle have been announced, including a proposed bike-sharing pilot, and more bike-parking at MRT stations. The North-South Corridor - a 21.5km expressway that will connect towns in the north to the city and to be completed around 2026 - will also have a cycling trunk route.

Two years ago, Ang Mo Kio was identified as a car-lite test-bed.

A key feature is a 2.6km walking and cycling corridor that will link Yio Chu Kang MRT station to the Bishan-Ang Mo Kio Park, making use of space under the MRT viaduct. The first kilometre of this corridor - from the park to Ang Mo Kio MRT station - has been completed as part of the $7 million Phase 1, with the remaining 1.6km to be built in Phase 2. Construction is expected to start next year, during which another 16km of cycling paths will also be added, making Ang Mo Kio the town with the longest cycling network.

Mr Lee said: "Even in a busy neighbourhood, we can carve out a little bit of space; underneath the MRT viaduct, now we have a sheltered walking and cycling path."

Phase 1 has also seen the introduction of marked zones to better separate pedestrians and cyclists at areas such as bus stops. A slip road located at the junction of Ang Mo Kio Avenues 1 and 3 was removed to offer more space and increase safety for pedestrians and cyclists. There are plans in Phase 2 to also narrow the road along Street 44.

LTA's director for active mobility and policy Tan Shin Gee, said: "In Singapore, where it is so built-up, the reality is that if you want to give space to one group of users, there is a trade-off" on another segment.

Ms Amy Ong, a retiree in her 50s, appreciates the new cycling path under the viaduct. "Before, there were many potholes and at some stretches we had to carry our bikes and use stairs. These have been replaced with slopes with a gentle gradient."