With under 50 days to go until analogue TV signals are turned off, most Singapore households have switched to digital TV - though around a fifth have still yet to do so.

From Jan 1 next year, analogue TV signals will be disabled - meaning households that have not switched to digital television (DTV) will no longer be able to watch Mediacorp's free-to-air programmes.

Minister for Communications and Information S. Iswaran revealed in a parliamentary written reply in September that four out of five households have DTV.

He said: "The Infocomm Media Development Authority (IMDA) is reaching out to the remaining households to get them DTV-ready before analogue TV signals are switched off on Dec 31, 2018."

Switching from analogue to digital broadcasting will set a family back about $100 to install equipment to convert analogue signals to digital.

The plan to end analogue broadcasts at the end of last year was put on hold for a year to get more people to switch.

As a result, the Government has set aside $40 million to help equip homes to receive digital broadcasts ahead of the Dec 31 deadline. 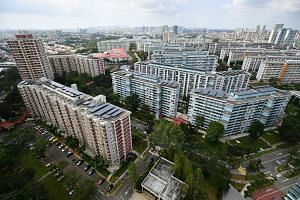 What is digital broadcasting and how do you know if you can receive it?

In April, The Straits Times reported that up to 400,000 Housing Board homes had still to make the switch from analogue to digital broadcasting.

The IMDA had said it would start sending letters to these households, informing them that they are entitled to free equipment worth $100.

The homes can choose to either have a free digital set-top box and antenna installed at their home free, or get $100 off digital TV equipment of their choice at participating stores.

From Sept 17, households which have not made the switch have also seen a smaller picture on their screens, serving as a visual reminder for them to make the switch before analogue TV signals are switched off.

There are also on-screen instructions to inform viewers how to make the switch to DTV.

Users can also, among other benefits, choose which of the subtitle and language options to display.

Last year, then-Minister for Communications and Information Yaacob Ibrahim said the Government was committed to helping Singaporeans switch to digital TV and enjoy its benefits.

He said in Parliament last November that access to Mediacorp's free-to-air channels is important as they are a key source of news and entertainment in four languages, and carry programmes that promote societal values and the Singaporean identity.

Straits Times subscribers who have not made the switch to digital broadcasting can also take advantage of a special deal to get a digital television set.

In a tie-up with Philips and as part of the "ST+ news with benefits" programme to reward subscribers, they can buy a Philips 6000 series 4K Ultra Slim Smart LED TV set for nearly half the price from Nov 13 to Dec 9.

For more details of this special promotion, go to: readsph.sg/philipstv

A version of this article appeared in the print edition of The Straits Times on November 15, 2018, with the headline 'Analogue TV will go off air in less than 50 days'. Subscribe
Topics:
More
Whatsapp Linkedin FB Messenger Telegram Reddit WeChat Pinterest Print Purchase Article Copy permalink