SINGAPORE - All Saints Home, a voluntary welfare organisation (VWO), will officially open its fourth nursing home in Jurong East on Friday (May 20).

The premises is owned by the Ministry of Health (MOH) under the Build-Own-Lease model, in which MOH builds and owns the nursing home, while All Saints Home operates it. The cost of the new facility was not disclosed. 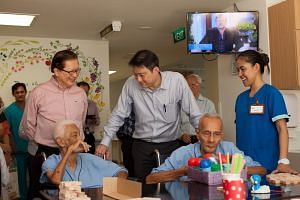 The Jurong East home has 194 beds, including 49 beds in its new dementia care ward. The other All Saints centres also house residents with dementia, but the Jurong East centre is the first to have a dedicated dementia ward to address their specific needs. A team of 20 specially trained nurses look after these residents who display symptoms like disorientation, memory loss and personality changes.

The dementia care ward at Jurong East is equipped with a physiotherapy centre, a rehabilitation hall and a multipurpose hall, where residents engage in "table tennis therapy" sessions run by volunteers from nearby churches and schools in the Yuhua estate nearby.

Each week, volunteers take turns playing with the home's residents, or facilitate games between residents by encouraging them and helping them to pick up the dropped balls. The aim is to provide a regular activity for the residents to look forward to, as well as to engage them in light exercise and socialisation.

All Saints Home depends on volunteers who interact with the residents through such activities, as there is not enough manpower for the staff to do it themselves.

The VWO cares for a total of 734 residents across the island. About 80 per cent of the residents come from needy backgrounds and have their care subsidised by the Government.