The use of artificial intelligence (AI) will not make soldiers obsolete, but it might redefine their roles in the future, said expert panellists at a technology summit yesterday.

In fact, soldiers could become more proficient if they are technically skilled and able to use AI systems to their advantage, they added.

Speaking at the second Singapore Defence Technology Summit, Israeli computer scientist Yaniv Altshuler said it is "not so unlikely" to foresee a future in which soldiers operate a swarm of armoured, autonomous or semi-autonomous vehicles remotely.

"Now, you see soldiers or pilots actually graduating from flying academies and they are flying drones. Do you call them pilots, or are pilots now redundant? The definition is changing. I think the same would be with soldiers," he said.

"I think AI will take on a huge amount of the burden. I think the armed forces of the future will be smaller, or at least can be smaller, given the current threat environment, unless something drastic changes," said the author of The Sentient Machine: The Coming Age Of Artificial Intelligence.

AI refers to technologies that can perform tasks that typically require human intelligence, such as speech recognition. This is done through software algorithms which let machines "learn" for themselves from vast amounts of data. 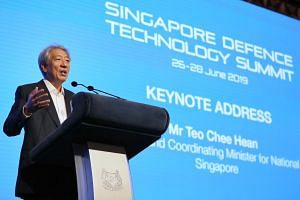 Reflect on how to use tech wisely in 'headlong rush' to deploy it: Teo Chee Hean

Urgent need for rules-based order in the cyber domain, which will be more contested: Ng Eng Hen

The three-day event, organised by the Defence Science and Technology Agency, at Shangri-La Hotel, has about 400 participants from 23 countries.

The 90-minute session yesterday was moderated by Dr Brian Pierce from the Information Innovation Office at the Defence Advanced Research Projects Agency in the US Department of Defence.

Responding to a question from the audience about whether AI makes people dumber, Dr Altshuler said a mechanic today can simply plug his computer into a car to detect faults instead of having to check manually. "Does this mean that he is dumber? I don't think so. Does he feel he is less proficient? I think the opposite. Will he have a better chance of fixing my car? Probably. So I think this is a very good analogy of what's going to happen to soldiers," he said.

"If you look at fighter plane pilots, they have a button today that says 'land the plane'. Of course if they push that button all the time and never land it themselves, then they will lose that skill. So as with all technical development, it's a related question which we need to think about, and we need to understand what's under the hood."