SINGAPORE - A Malaysian couple living in Singapore is in the news for "adopting" a two-year-old girl who disappeared from her Johor Baru home on Nov 9, 2015.

Toddler Angie Tiong, who is now under the care of Johor's social welfare authorities, was reportedly sold by her father to a man in Johor for RM12,000 (S$4,000). Police investigations into the case are ongoing.

Sources said the paperwork for Angie's adoption was done up by a Johor lawyer appointed by the couple's middleman. Angie's father also allegedly signed over custody of the girl to the couple, who are Singapore permanent residents.

What are the proper procedures for couples who want to adopt a child in Singapore?

Here are nine things to note: 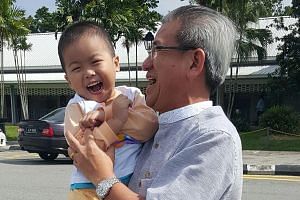 Under Singapore's Adoption of Child Act, both married couples and singles can adopt a child. However, a single male is not allowed to adopt a girl unless special circumstances exist.

They must be Singaporean citizens or permanent residents, or hold passes which the Family Justice Courts deem fit to qualify them as residents in Singapore.

Prospective adopters must be at least 25 years old and at least 21 years older than the child, among other things. An exception may be granted if the adopter is related to the child by blood.

They should also not be older than the child by more than 50 years.

2. Who can couples turn to if they wish to adopt a child?

According to the Ministry for Social and Family Development (MSF), a couple can look for a child to adopt through their relatives, friends or other parties.

The child has to be transferred in a proper manner that does not violate the laws of any country, and signed consent from the child's birth parents must be obtained.

Alternatively, they can adopt a child under State care. They are, however, required to complete a home study before they are allowed to identify a child from the MSF for adoption.

The child must be below 21 years old. He or she must also be a resident of Singapore - either a Singapore citizen or permanent resident. A child residing in Singapore on a visit, student's or special pass does not qualify.

Yes, but they must meet the requirements set by the authorities.

All couples adopting a foreign-born child must complete a home study - which costs about $1,500 - that assesses their eligibility and readiness.

Adoption agencies told The Straits Times that a home study report can take months to complete as it involves lengthy interviews with a social worker who will ask detailed questions, such as the couple's childhood and their attitudes to parenting.

There are currently six MSF-accredited agencies that are allowed to conduct home study reports.

Once a couple successfully completes a home study report, they must apply for a Dependent's Pass for a child to remain in Singapore until the adoption is finalised.

An application for a Dependent's Pass, which is valid for nine months, is typically processed within two weeks.

5. Which foreign countries do couples here usually adopt a child from?

The bulk of foreign adopted babies used to come from Malaysia and Indonesia.

But there has been a growing trend of people turning to online forums to look for babies to adopt as there are fewer babies from these countries up for adoption.

China also used to be a main source of babies for adoption, but numbers fell sharply after an agreement between the Singaporean and Chinese governments to bar agents from finding Chinese babies, so as to prevent illegal cash-for-baby transactions.

Since 2004, only two charities accredited by the MSF - Touch Family Services and Fei Yue Community Services - have been allowed to handle China adoptions.

6. How long does it take to process an adoption application?

In general, it takes between five and seven months from application to approval from the Court, according to information on the MSF website.

This could take longer when adopting a foreign child as it involves a home study report and application for a Dependent's Pass.

7. What are the costs involved?

It is illegal to pay the birth parents for giving up their child for adoption, although adopting couples can reimburse them for pre-natal and post-natal expenses, including hospital delivery bills.

A detailed breakdown of all financial transactions, including agent fees and reimbursement to parents, must be provided to the Court.

8. What are some other things couples should note?

The MSF website lists up to 15 steps needed to adopt a child, depending on whether he or she is local or foreign-born.

The couple must first attend a compulsory Pre-Adoption Briefing (a one-off session lasting 2.5 hours) conducted by a MSF-accredited agency, followed by a home study if the child is foreign-born.

After identifying a suitable child, they must then obtain signed consent from the birth parents, as well as the child's identification documents, before applying for a Dependent's Pass (for a foreign-born child).

Only then can an application be submitted to the Family Justice Courts, culminating in a hearing to determine if the adoption application is successful.

9. How have adoption numbers changed over the years?

In 2014, 352 children were adopted, a sharp plunge from 731 a decade ago, MSF figures showed. The fall has been attributed to fewer unwanted babies and restrictions on adopting babies from China.

About six in 10 children adopted between 2009 and 2014 were born overseas, mainly in neighbouring countries.