In the first of a two-parter on Singapore's anti-drug efforts, Theresa Tan and Tan Tam Mei look at how some youth get their kicks overseas and even share and consume drugs in school

Jessica was only 15 when she tried weed - as she and her friends called marijuana - out of curiosity.

They were not troubled children or school dropouts. Jessica, now 21, went on to polytechnic and is now waiting to start university.

At the polytechnic, she and her friends would sometimes smoke the illicit substance in the school toilet or a nearby park, though they usually went to someone's house to get high.

The habit came to an end in 2015, when she was arrested for drug consumption and placed on a year's probation.

But her story is increasingly familiar - 151 young Singaporeans and permanent residents studying in primary to tertiary public educational institutions were caught for drug offences last year, up from 124 in 2015 and 83 in 2014.

Some are brazen enough to take or pass around drugs like marijuana on school grounds, The Straits Times found from interviews with 25 drug counsellors, doctors, lawyers and young people.

In Parliament in April, Law and Home Affairs Minister K. Shanmugam sounded the alert on the growing number of youth being nabbed for drug offences.

One of those was a primary school pupil who tested positive for Ice. His mother said he used to be a "joyful" boy, but he fell into bad company, lost interest in school and started taking drugs, a Central Narcotics Bureau (CNB) spokesman said without giving more details.

An MP for Ang Mo Kio GRC, Dr Intan Azura Mokhtar, said in April's parliamentary session that two friends of her son had asked him to join them to smoke cannabis, another word for marijuana. Her 18-year-old son declined.

Drug use among the young: Treatment critical but challenging, say experts 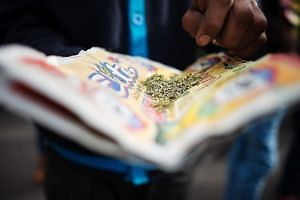 Noting that one of his schoolmates at the polytechnic had been caught for smoking cannabis, Dr Intan urged the authorities to "go all out" to stop drug abuse in schools.

Mr Robin Tay, programme manager at The New Charis Mission, which runs a halfway house, said: "It was very uncommon to hear of students doing drugs in school in the 1980s and 1990s, but I think there are more of such cases now. I think students have become more daring." 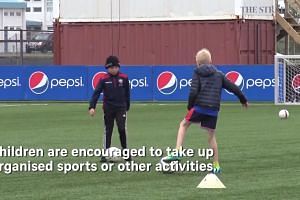 Drug use among the young: In Iceland, stakeholders keep ears close to ground

Mr Tay, 40, a former drug addict who was incarcerated six times, said that in the past few years, several students have been sent to the charity for rehabilitation. They included a 17-year-old polytechnic student who sold drugs to his schoolmates for income to feed his own drug habit. He was caught and placed on probation for two years.

An 18-year-old client of lawyer Amarick Gill did not get off so lightly for selling marijuana online. He went to the Reformative Training Centre, where young offenders aged 14 to 21 undergo a tough regime of foot drills, counselling, education and vocational training every day.

Youth told The Straits Times they were introduced to marijuana - the most popular drug among those interviewed - by friends. Most tried it out of curiosity. They included both genders from the Institute of Technical Education, polytechnics and universities here.

Johnny (not his real name), 21, who recently graduated from polytechnic, said he smoked marijuana a few times, but has quit, now that marijuana is "off his bucket list".

He shared a view echoed by the other youth: "Since some states in America have legalised weed, and there are (foreign) celebrities smoking it, people think it's not harmful."

The youth say they smoked marijuana mostly outside school, at someone's home, at parties or even void decks. And some pooled their money with their friends so they could afford it.

Last year, cannabis cost an average of $33 per gram while Ice was sold at $120 per gram, said the CNB spokesman.

CNB communications director Sng Chern Hong said: "Sometimes the older youth provide drugs to the younger ones for free at the start. Once they get hooked, however, they will start to pay the price, literally."

Unlike in the past, when drug abusers tended to be from lower-income and troubled families, more of today's young drug abusers hail from middle and even upper middle-class families, with parents who have no history of drug abuse, those interviewed say.

Lawyer Ray Louis said: "The profile of young drug users is no longer pigeonholed to a particular stereotype of children from broken families or those who join gangs. Some of them also come from good schools."

The Government's Task Force on Youth and Drugs commissioned a survey in 2015, which found that cannabis abusers came from either middle or high socio-economic households, unlike Ice abusers, who tended to come from lower-income backgrounds.

The survey - which polled 700 young people aged between 12 and 29, including more than 200 drug abusers - found that a high proportion of cannabis abusers did well in school and only a small proportion had parents with drug histories.