In the heartland of Bukit Batok, Mr Ryn Aldrige Wu was hard at work with his team of about five craftsmen trying to piece together a huge three-dimensional puzzle of levers, wind tunnels, dovetailed wooden panels and shiny 5.5m- high tin and zinc pipes.

Though Mr Wu, 25, is a recent aerospace engineering graduate from Nanyang Technological University, the machine he is building is not a modern aircraft.

But it is nearly as complicated - a pipe organ, a rare thing in a Housing Board neighbourhood.

"I had to learn organ-building from scratch," said Mr Wu, the son of Carillon Technology Singapore's director, Mr Roster Wu.

The company makes and maintains bells, organs and clocks.

Together with Filipino firm Diego Cera Organbuilders, Carillon is building the first new pipe organ in Singapore in 15 years.

The last one was built at the Esplanade Concert Hall in 2002. When it is finished, the instrument at international school Dulwich College (Singapore) will give nearly 2,000 students, aged from two to 16, the opportunity to tinker with the king of instruments.

There are about 10 pipe organs here but it is the first time one is being built in a secular school rather than a concert or church hall.

Dr Evelyn Lim, dean of the Singapore Chapter of the American Guild of Organists, welcomed the news.

"Young eyes, ears, hands and feet may have opportunities to get very close to the instrument, and their musical experience may grow with their exposure to it," she said.

She added that organ classes are rare, even in music schools. Having more opportunities to play and listen to pipe organs would help Singapore match the wider range of music offered in Western countries.

Mr Matt Simmons, regional director for South-east Asia at Dulwich College International, the parent organisation of the Singapore college, said the acoustics of its 700-seat theatre, the organ's home, had to be modified to make it more reverberant.

"We encourage every student to learn a musical instrument and the organ will provide unique opportunities," said Mr Simmons. He said the college hopes to attract international and local talents to play it.

The instrument is the first pipe organ in Singapore to be made in Asia rather than Europe. A team of 15 craftsmen took a year to make the parts in Diego Cera's workshop in Las Pinas, a city near Manila that is home to a famous organ with pipes made of bamboo. 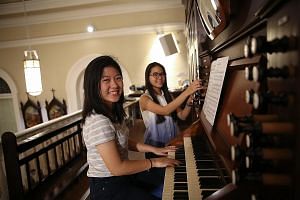 Everything was loaded into two large freight containers and sent to the Port of Manila, arriving by sea in Bukit Batok two weeks later.

Young eyes, ears, hands and feet may have opportunities to get very close to the instrument, and their musical experience may grow with their exposure to it.

DR EVELYN LIM, dean of the Singapore Chapter of the American Guild of Organists, on the organ.

Installation began in Dulwich's theatre in late June and the six-tonne instrument is expected to be ready for playing in October. Every one of the 2,432 pipes has to be adjusted by hand to produce accurate pitch and optimal sound.

The elder Mr Wu revealed that Diego Cera had beaten two major firms, one German and the other British, to the job.

One thing the clients liked, he said, was how the pipes in Diego Cera's design are controlled with the keyboards via traditional levers rather than the electric circuits used in many modern pipe organs.

The company restored Singapore's oldest organ, which was made in 1912, at the Cathedral of the Good Shepherd in Queen Street.

Diego Cera organ-builder Cealwyn Tagle, 46, said the Asian pipe organ market is growing. He is building other instruments in the Philippines and Hong Kong.

Dr Margaret Chen, artistic director of the Organ Series of concerts at Singapore's Victoria Concert Hall, said organ music goes beyond church music. The instrument is needed to play the large amount of music that has been written for it over the centuries.

"No organ music equals no access to hundreds of Bach's greatest compositions," she said. German composer Johann Sebastian Bach (1685-1750) wrote many works for the organ.

Mr Tagle's favourite set of pipes in the organ at Dulwich is one that sounds at an unusual pitch above the other pipes, imparting a piquant character to the notes.

"I put it into every instrument I build," he said. "It has a lot of character."

Not your ordinary box of whistles

A version of this article appeared in the print edition of The Sunday Times on September 03, 2017, with the headline 'A new king is born'. Subscribe
Topics:
More
Whatsapp Linkedin FB Messenger Telegram Reddit WeChat Pinterest Print Purchase Article Copy permalink