Almost 1 1/2 years after he was arrested in Tanjung Berakit waters off Bintan island last year, boat captain Shoo Chiau Huat at long last returned to Singapore, and his wife and four children, yesterday.

Stepping out of the arrival hall at the Tanah Merah Ferry Terminal, the 51-year-old wore a wide smile as he spotted his daughter Michelle, 28, who was there to receive him with his younger brother and sister-in-law.

He embraced his daughter with a weary grin. "I'm very happy to be back," said Mr Shoo. "The most important thing for me now is to go home and be with my family."

His return marks the end of his detention in Tanjung Pinang. On April 16 last year, his boat, ferrying 13 recreational anglers from Singapore and Malaysia, was stopped for trespassing by the Indonesian Navy in the waters of Tanjung Berakit, off Bintan island.

His release follows the return of another Singaporean boat captain, Mr Ricky Tan Poh Hui. The 45-year-old had been detained for eight months for trespassing in Indonesian waters, and came back to Singapore in May. He was also present at the terminal yesterday.

Mr Shoo found out he would be released only yesterday morning.

"The police there said someone from the embassy was here for me," he said. "I was elated, and packed my clothes and left." 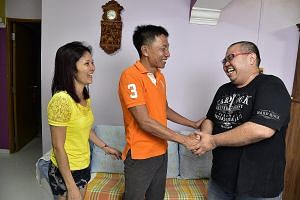 Singaporean boat captain's 16-month ordeal: It began at sea, with guns pointed at him

His 51-year-old wife Jasmine, whom he last saw six months ago, did not go to the terminal, but waited for him in their four-room flat in Sengkang with a home- cooked meal instead. She greeted him with a smile of relief when he entered their home.

When asked how it felt to be reunited with him, she became visibly emotional. She said: "I couldn't believe it when I heard that he would be returning today. I've heard it might happen so many times before, but it never turned out to be true."

Since her husband's detention, it had been a long wait for Mrs Shoo, who does administrative work in an insurance company. On Mondays, she would rush to Punggol East MP Charles Chong's Meet-the-People Session after work to ask for assistance, but days stretched into months.

"I hope he can have a new life, and new beginnings," she said yesterday. "It feels like a dream."

Mr Shoo had been arrested for illegal fishing, and was acquitted in July last year, but remained in detention over immigration offences.

In January this year, he pleaded guilty to entering Indonesia illegally and paid a 50 million rupiah (S$5,100) fine in March.

On April 4, he was charged for the third time - with sailing in Indonesia's waters without a permit under the country's shipping laws. The charge was dismissed on May 3.

While the prosecution's appeal against his acquittal in connection with illegal fishing was thrown out in April, Mr Shoo remained under "house arrest", waiting for a ruling on an objection against the dismissal of a separate charge of sailing without a permit. It remains unclear if the ruling has been made.

The Ministry of Foreign Affairs said the Singapore Consulate in Batam and Singapore Embassy in Jakarta had been engaging the Indonesian authorities regularly to ensure Mr Shoo was accorded his due legal rights, and to request that his case be processed expeditiously.

"It was tough in jail," said Mr Shoo. "I wondered why the prosecution kept appealing, and objecting to my acquittal."

"The most difficult point for me was being detained in the local jail, where there were over 70 people in a cell," he said, adding that he used to call his family daily.

Said his younger brother Yong Shoo, who works as a storeman and was at the ferry terminal yesterday: "It's like a weight has been lifted from my chest. We were very worried, as there was no confirmed date of return all this while.

"We would communicate over the phone two to three times a month, and I'd tell him about how the family is doing," added the 48-year-old, who is the youngest of four siblings.

He visited his brother during court hearings in Tanjung Pinang about four times last year.

Asked about his future plans, Mr Shoo Chiau Huat said he might not continue working as a boat captain, but has not decided what he would do.

Home at last, after 16 months

Singaporean boat captain Shoo Chiau Huat, 51, back at his home in Sengkang, 16 months after he was arrested for illegal fishing on April 16 last year in Tanjung Berakit waters, off Bintan island. Greeting him are two of his sons, and his wife Jasmine, who said it felt like "a dream". He is seen stepping over a brazier of coals in a bid to rid himself of "bad luck".

A version of this article appeared in the print edition of The Straits Times on August 30, 2017, with the headline 'A home-cooked meal for husband after nearly 11/2 years'. Subscribe
Topics:
More
Whatsapp Linkedin FB Messenger Telegram Reddit WeChat Pinterest Print Purchase Article Copy permalink