Muah Chee is an unlikely subject when talking about the Singapore identity. But there is a connection which I will come to later.

It is a simple snack made of glutinous rice covered with ground peanut which doesn't stir up the same passionate debate among local foodies as char kway teow or chilli crab.

You won't find a list of the top 10 places to eat it like you will for other hawker fare.

Which is why it will probably disappear when the handful of people making it the traditional way pass away.

Too few hawkers interested in the trade and too few customers who care about its survival add up to a recipe for extinction.

But not if Dr Leslie Tay, general practitioner and better known as the food blogger behind ieatishootipost, can help it. He is on a campaign to save muah chee.

I got to know him when we both served on the Hawker 3.0 Committee set up by the Government to recommend ways to keep the hawker trade alive so Singaporeans can continue to enjoy their rojak and mee goreng at affordable prices.

So, what is it with muah chee?

I am at Hougang Muah Chee at a foodcourt in the basement of the HDB Hub in Toa Payoh to find out.

The stall is operated by possibly the last of the muah chee families, the recipe passed through generations.

History, language, culture, symbols, events and food all matter and shape a people's sense of who they are. But ask anyone to describe what identity is, and chances are they will struggle for clear answers. Singapore is no different.

Mr Teo Yong Joo, 53, started at the age of 14, helping his father grind the rice when they operated a stall at the old Simon Road market.

I tuck into it and the first thing that strikes me is its freshness which comes from it being handmade, the pieces nipped off the main bowl when you order, cut individually, and rolled in ground peanut.

The texture is just right, not too sticky but firm enough so you need to chew on it and savour the delicate flavour of the rice and the richness of the peanut.

After this, there is no going back for me to the mass-produced muah chee you find at shopping malls where it is often sold with rice dumplings, steamed corn and kueh tutu. 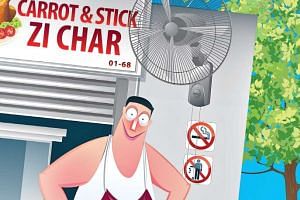 So who wants to be a hawker?

Why is it that muah chee so good can't survive if not for the help of Dr Tay and others?

When I visit his stall, Mr Teo tells me that it is a cheap snack selling for only $2.50, and if you're a specialist like him who sells only this one delicacy, you can't make it a viable business.

He is here because the foodcourt operator Koufu was persuaded to let him run the stall at a special rent. It's doing all right, enough for him to get by but just.

I am interested in this muah chee story because I think it captures the dilemma every society faces: How much of the old and familiar it should try to retain, how much of the new it should welcome and absorb. More importantly, how the choices it makes affect its identity as a nation and a people.

I believe this question of identity is an important subject and have made it the focus of my research work at the S. Rajaratnam School of International Studies.

It is an issue of growing importance because people everywhere feel the world is changing too quickly and they have lost a part of their familiar self which kept their societies together.

Some of the ground-breaking events of the past year from Brexit to the election of Mr Donald Trump have their roots in this sense of loss.

Affected citizens want to reclaim the identities they believe have been lost as a result of immigration, globalisation or whatever they blame for their restlessness.

But what is it exactly they claim to have lost? Most of the experts who have studied identity say it is a difficult thing to grasp and define.

History, language, culture, symbols, events and food all matter and shape a people's sense of who they are. But ask anyone to describe what it is, and chances are he or she will struggle for clear answers.

Singapore is no different.

In fact, it might be even more difficult to describe its identity because it isn't a natural country with its own language or culture.

Also, identity changes with time with new generations of citizens, new migrants with their foreign ways, and new influences from the outside world.

Has Singapore's identity changed over the years, and from what to what?

That's what I am working on.

For now, these are my muah chee takeaways.

First, changes to Singapore's identity will be the result of not just government action (which is important such as its language policies) but also the actions of ordinary Singaporeans who feel strongly about different parts of their past.

Dr Tay championed muah chee but there are many others working in their own areas of interest.

The Straits Times reported last week about a group of heritage enthusiasts successfully lobbying for the conservation of an old building, The Quadrant, in Cecil Street. The Bukit Brown activists deserve recognition too for their brave if unsuccessful attempt to preserve the cemetery.

Identity is never static and always contested and reconstructed by active members of the society staking their claims.

Second, the contest over identity is ultimately one of values.

Muah chee will not survive if people decide that its economic viability is all that matters.

But should that be society's sole consideration?

What about tradition and heritage, craftsmanship and sense of community? How much value should Singapore place on these intangibles as it shapes its changing identity?

Third, beware the "it doesn't matter much" argument. I don't think muah chee will survive for long and it probably won't be missed much. Other new-fangled snacks will take its place.

No big loss? But if we make the same argument repeatedly over other small disappearances, the cumulative effect might be considerable and, before we know it, we would have lost a big chunk of Singapore's heritage.

Once lost, it would be almost impossible to recover.

I can think of one other reason why muah chee matters. Singapore now wants to encourage a culture in which people appreciate skills and craftsmanship rather than an obsession with academic achievements.

The call will ring hollow if it doesn't act accordingly.

Dr Tay believes heritage hawkers who have special skills should be recognised and granted privileges such as priority in getting stalls. It's a practical way of demonstrating the country is serious about respecting those who have mastered a craft.

Ultimately, what sort of deep skills Singapore wants to develop among its people isn't just an economic issue.

It is also about identity.

• The writer is also a Senior Fellow at the S. Rajaratnam School of International Studies, Nanyang Technological University

A version of this article appeared in the print edition of The Sunday Times on April 02, 2017, with the headline 'A flavour of S'pore identity is lost without muah chee'. Subscribe
Topics:
More
Whatsapp Linkedin FB Messenger Telegram Reddit WeChat Pinterest Print Purchase Article Copy permalink